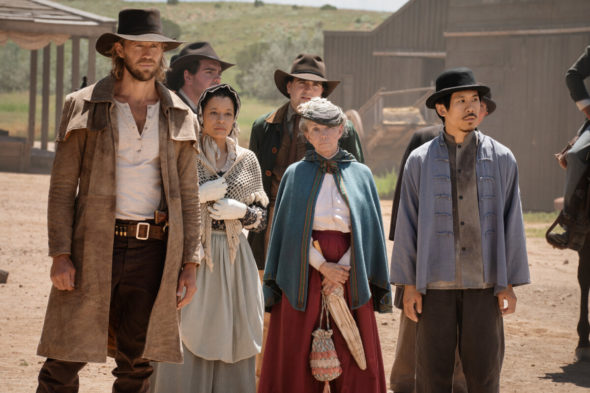 This frontier town isn’t what it seems. Has the Walker: Independence TV show been cancelled or renewed for a second season on The CW? The television vulture is watching all the latest cancellation and renewal news, so this page is the place to track the status of Walker: Independence, season two. Bookmark it, or subscribe for the latest updates. Remember, the television vulture is watching your shows. Are you?

Airing on The CW television network, the Walker: Independence TV show is a prequel to the Walker series. It stars Katherine McNamara, Matt Barr, Katie Findlay, Greg Hovanessian, Philemon Chambers, Justin Johnson Cortez, Lawrence Kao, and Gabriela Quezada. The story is set in the late 1800s and follows Abby Walker (McNamara), an affluent and tough-minded Bostonian whose husband is murdered before her eyes while on their journey out West. After crossing paths with Calian (Cortez), a curious Apache tracker, Abby arrives in the town of Independence, Texas. There, she encounters eclectic residents running from their pasts, chasing their dreams, and keeping their own secrets. Abby also literally runs into Hoyt Rawlins (Barr), a slippery rogue, thief, and con artist with a dented heart of gold who quickly eyes Abby as a mark — until she turns the tables on him. Abby and Hoyt soon find themselves precariously aligned, both seeking to uncover the truth about the identity of Abby’s husband’s killer. They also vow to save Independence, a frontier boomtown where nothing is what it seems.

The first season of Walker: Independence averages a 0.05 rating in the 18-49 demographic and 537,000 viewers in the live+same day ratings (including DVR playback through 3:00 AM). While these numbers don’t include further delayed or streaming viewing, they are a very good indicator of how a show is performing, especially when compared to others on the same channel. There can be other economic factors involved in a show’s fate, but typically the higher-rated series are renewed and the lower-rated ones are cancelled. Find out how Walker: Independence stacks up against other The CW TV shows.

Will The CW cancel or renew Walker: Independence for season two? Previously, the network was used to air Paramount and Warner Bros. series and didn’t focus on being profitable because the parent companies made money selling the shows internationally and via streaming. Now that the network is run by Nexstar, The CW is shifting toward using acquired and inexpensive original programming to fill the schedule. The goal is to focus on programming that attracts a broad demographic and I think this show fits the bill. It’s produced by CBS Studios (which is owned by Paramount Global, which owns 12.5% of the network), so I think it’s got a good chance of surviving. I’ll update this page with breaking developments. Subscribe for free alerts on Walker: Independence cancellation or renewal news.

What do you think? Do you hope that the Walker: Independence TV show will be renewed for a second season? How would you feel if The CW cancelled this TV series, instead?

I would be disappointed if you cancel walker independent