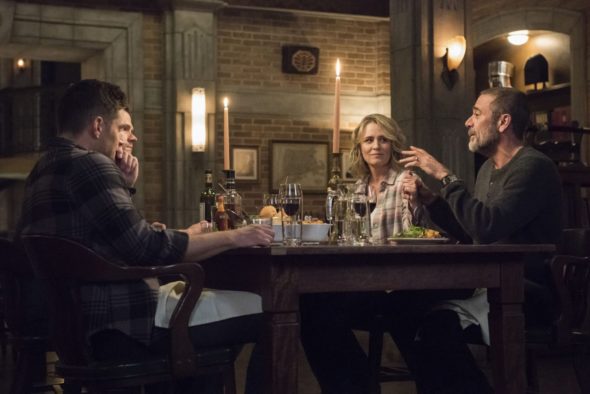 Supernatural fans may soon have more of The Winchesters to see. Danneel and Jensen Ackles are working on a prequel series for The CW. Supernatural ended earlier this year after 15 seasons on the air. Ackles has already moved onto his next series with a role in season three of The Boys (Amazon), but he is not ready to give up his Supernatural roots entirely.

According to Deadline, Ackles will narrate the series, which will be based on the lives of the Winchester boys’ parents. The series will tell “the epic, untold love story of how John met Mary and how they put it all on the line to not only save their love, but the entire world.” Supernatural co-executive producer Robbie Thompson will write on the project.

Ackles spoke about the potential new series and said the following:

“After Supernatural wrapped its 15th season, we knew it wasn’t over. Because like we say in the show, ‘nothing ever really ends, does it?’ When Danneel and I formed Chaos Machine Productions, we knew the first story we wanted to tell was the story of John and Mary Winchester, or rather the Supernatural origin story. I always felt like my character, Dean, would have wanted to know more about his parents’ relationship and how it came to be. So I love the thought of having him take us on this journey.”

The CW has not ordered the project to series, but it looks like a distinct possibility considering the popularity of Supernatural on the network.

Ackles’ Supernatural co-star, Jared Padalecki, apparently has no connection to the project and expressed disappointment that he first learned about it online.

Dude. Happy for you.
Wish I heard about this some way other than Twitter.
I’m excited to watch, but bummed that Sam Winchester had no involvement whatsoever. https://t.co/bAcEvFKM7p

Padalecki posted a third tweet aimed at Thompson that said “Et tu brute? Wow. What a truly awful thing you’ve done. #Bravo you coward.” That message has since been deleted.

Series creator Eric Kripke posted a message in support of the project.

When @JensenAckles first told me this story, I loved it. He & @DanneelHarris & @rthompson1138 are the perfect people to make it. (The other perfect person is too busy Texas Rangering.) Thanks for carrying the torch, guys, go kick it in the ass. Proud of you. #SPN #SPNFamily https://t.co/56hg9NwdHc

Update: Ackles and Padalecki have apparently worked things out.

Love you @jarpad …
Miss these talks. I forgot how much face time we always used to get. And I miss that too. I know you’re busy…as am I, but you’re still my brother. I miss you, pal. https://t.co/KtRKYkvc2K

Love and miss you both.

What do you think? Would you watch The Winchesters if The CW orders it to series? Does it bother you that Padalecki isn’t part of the project?

Not sure. Without Sam and Dean, The Boys, I have a hard time thinking about investing myself in a stranger-filled Supernatural spin off. I think the fellow who wrote they should have waited a few years is correct. My mind is still filled with 15 years of Sam and Dean. Maybe in a couple years, I would want more Supernatural in any form.

I would probably watch. I just don’t understand why Jared wasn’t in on it. Surely some negotiations could have been worked out. The Winchesters are 4 people not three. How will that be explained? It shouldn’t have to be explained. It’s Sam and Dean. I followed this from day one in 2005. I called them my boys. I have two sons one brown eyed and brown hair and 6’4″ and the other is blond and blue eyed about 6′. And so I called Sam and Dean my boys. Went through several tissues on the last two episodes. I just would… Read more »

It would have been better to wait a few years and give people a chance to really miss Supernatural, instead of diving straight back in.

This was a wonderful show and I miss all the people who starred in it. This prequel will be welcomed with open arms and a very happy heart. Please, please air this on any network, I will find it and share it with my friends and family.

Without a doubt! Don’t care is Sammy not there there still are a ton of lore to tell

Absolutely I loved the show miss the boys

I wish this show and all its iterations would die already.