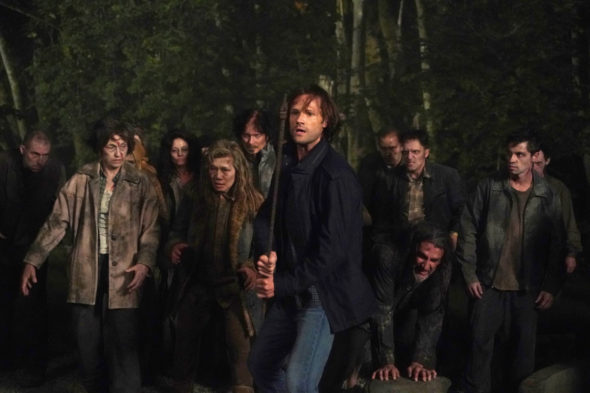 Supernatural fans wondering where they will get their weekly dose of Jensen Ackles and Jared Padalecki once Supernatural ends now have some new information on that. Once things wrap on CW for Supernatural, Padalecki could be playing a character rooted in Texas. The actor has landed the lead role on a potential Walker: Texas Ranger reboot, which is simply titled Walker.

The reboot project does not have a home yet, but The CW has expressed interest. CBS is also interested. That was the network home for the original series, which stars Chuck Norris. The series is currently being shopped around by CBS Studios. Anna Fricke is taking on writing duties for the series, and Padalecki would both headline and executive produce on the reboot.

Yes, that means Padalecki is taking on the role of Cordell Walker. He won’t be working alone either. Walker will have a female partner on the series. No word on who will play that role in the series yet.

Deadline revealed the following about the series and Padalecki’s version of Walker:

“At the center of the series is Cordell Walker (Padalecki), a man finding his way back to his family while investigating crime in the state’s most elite unit. Our broken widower and father of two returns home to Austin after being undercover for two years for a high profile case – only to discover that there’s even more work to be done at home. In a nod to the original series, Walker and his new partner — one of the only women in Texas Rangers’ history — are the modern day heroes our world needs, following their own moral code to fight for what’s right, regardless of the rules.”

Padalecki shared news of the casting on his Twitter on Monday, but he didn’t comment about it. Supernatural is currently filming episodes for its final season, which kicks off next month on CW.

Are you excited to see Jared Padalecki’s next project after Supernatural? Would you watch Walker on whichever network it landed on? Tell us what you think.

I would watch the reboot of walker trxas ranger on whatever chsnnel is is on.I am glad that jerred paleki has a new series

No, this won’t work. WTR was Chuck Norris and vice versa. Jared Padalecki has no martial arts skills, and that was a huge part of the appeal of the original show. Not interested. Should have stuck with Supernatural.

I think that Could be a Very Good Show. Jared would be Good for the Reboot!!!

I am so excited for this! Padalecki will be awesome in this role. He’s a talented actor and I can’t wait for Walker!

Heck yeah! I would love for this to happen. I loved WTR with Chuck Norris, but just look at the new MacGyver – it doesn’t taint the original show in any way, the characters are likable, and it it’s a fresh update. Both the original show and the new version are good and I see no reason why a new WTR wouldn’t be good either . I don’t see it as “stealing from the past”. Nothing is original anymore anyway, it’s ALL been done before. Besides, I LOVE remakes/reboots/sequels when it comes to franchises I personally love. I see it… Read more »

I don’t remember there being such uniqueness about the show that it will feel the same. I mean you have a Texas Ranger and that’s about it. It kinda was all about Chuck and his martial Arts. Any new show about the Rangers would work and being Walker doesn’t matter. MacGyver has a unique character so if they tried to redo it without the name it would seem like a ripoff. Heck even magnum pi has a specific set up and characters that copies would be obvious. But just a Texas Ranger show with out the walker name would be… Read more »

Yes I will be watching. He won’t be Sam. Should be interesting tho.

Of course! But I hope it lands on CBS, Jared deserves the mainstream accolades.

Not a chance. I like Jared but there is only one Walker and he is not it. It’s high time for Hollywood to have some orginal ideas and stop rehashing th ed same old thing over and over. Stop stealing from the past and buckle down and actually do some work and create something new and orginal.

Agreed. They’re not even trying to hide their desperation.