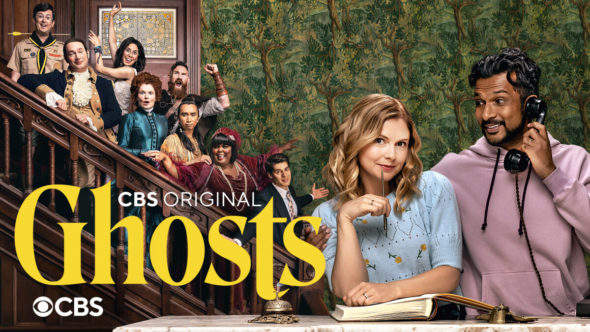 Last season, Ghosts was CBS’ highest-rated new scripted series. While comedies like B Positive, How We Roll, and United States of Al were all cancelled, it was no surprise that Ghosts was renewed. But, how will this supernatural comedy perform in season two? Will it continue to be a hit? Will Ghosts be cancelled or renewed for season three? Stay tuned.

A single-camera comedy series, the Ghosts TV show stars Rose McIver, Utkarsh Ambudkar, Brandon Scott Jones, Richie Moriarty, Danielle Pinnock, Asher Grodman, Roman Zaragoza, Sheila Carrasco, Rebecca Wisocky, and Devan Chandler Long. Recurring players in season two include Arthur Holden, John Hartman, Betsy Sodaro, Christian Daoust, Rodrigo Fernandez-Stoll, and Ravi Patel. In the story, freelance journalist Samantha (McIver) and up-and-coming chef Jay (Ambudkar) are a couple from New York City. When Sam inherits a rundown country estate in upstate New York, they throw caution to the wind and decide to convert it into a bed & breakfast. The hitch is that the estate is inhabited by numerous spirits of people who’ve died there over the years. The departed souls are a close-knit, eclectic group and are anxious about the commotion that a renovation and a B&B will bring to their home. Their outlook changes when, after an accident, they learn that Sam can see and hear them. In season two, Sam and Jay’s bed & breakfast is now open and the troubles of the estate’s residents are far from over.

For comparisons: Season one of Ghosts on CBS averaged a 0.54 rating in the 18-49 demographic and 6.37 million viewers in the live+same day ratings.

What do you think? Do you like the Ghosts TV series on CBS? Should it be cancelled or renewed for a third season?

November 17th was a rerun.

A bit more “sparkly” than the BBC UK series and nearly as good. Rose McIver’s performance is a treat to watch.