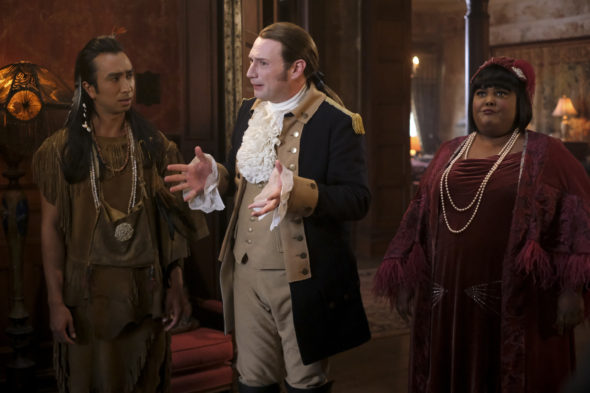 Sam and Jay’s B&B is finally open in the second season of CBS’ Ghosts TV show. As we all know, Nielsen ratings typically play a big role in determining whether a TV show like Ghosts is cancelled or renewed for season three. Unfortunately, most of us do not live in Nielsen households. Because many viewers feel frustrated when their viewing habits and opinions aren’t considered, we invite you to rate all of the second season episodes of Ghosts here.

A CBS single-camera supernatural comedy series, the Ghosts TV show stars Rose McIver, Utkarsh Ambudkar, Brandon Scott Jones, Richie Moriarty, Danielle Pinnock, Asher Grodman, Roman Zaragoza, Sheila Carrasco, Rebecca Wisocky, and Devan Chandler Long. Recurring players in season two include Arthur Holden, John Hartman, Betsy Sodaro, Christian Daoust, Rodrigo Fernandez-Stoll, and Ravi Patel. In the story, freelance journalist Samantha (McIver) and up-and-coming chef Jay (Ambudkar) are a couple from New York City. When Sam inherits a rundown country estate in upstate New York, they throw caution to the wind and decide to convert it into a bed & breakfast. The hitch is that the estate is inhabited by numerous spirits of people who’ve died there over the years. The departed souls are a close-knit, eclectic group and are anxious about the commotion that a renovation and a B&B will bring to their home. Their outlook changes when, after an accident, they learn that Sam can see and hear them. In season two, Sam and Jay’s bed & breakfast is now open and the troubles of the estate’s residents are far from over.

What do you think? Which season two episodes of the Ghosts TV series do you rate as wonderful, terrible, or somewhere between? Do you think that Ghosts should be cancelled or renewed for a third season on CBS?

Really love the show and the wit of cast and writers. Look forward to it every week. Hope there is a third season. The cast is great!

I have seen every episode of Ghosts and have enjoyed every single one. Normally I don’t watch comedies, but this one I and haven’t miss an episode.

3
0
Reply
Absolutely love the show. There’s so much crap on

Absolutely love the show. There’s so much crap on TV and this is truly one of the funniest.

I absolutely LOVE Ghosts!
It’s fresh, witty, and the cast members are prefect for their respective roles.
I already cannot wait for season 3!

We watch Ghosts and love every minute of it. Please keep it on the air!

I really don’t like the husband; replace him and the show will be good.

Ghosts is terrible and should be cancelled immediately. totally stupid

Such a good show…the actors are great, and the writing is amazing. Keep it up everyone, it is a nice break from all the drama in the world today!

Hi CBS! Great Season 2 Episode 1 ‘GHOSTS’ Show! Very funny! All of the actors are fantastic! The stories to be created for this show are endless! Looking forward to many Seasons to come! Thank you CBS and all actors and Producers for a funny show! Please Keep ‘GHOSTS’ going! Never ever think of cancelling it! ~ Peace, Marc