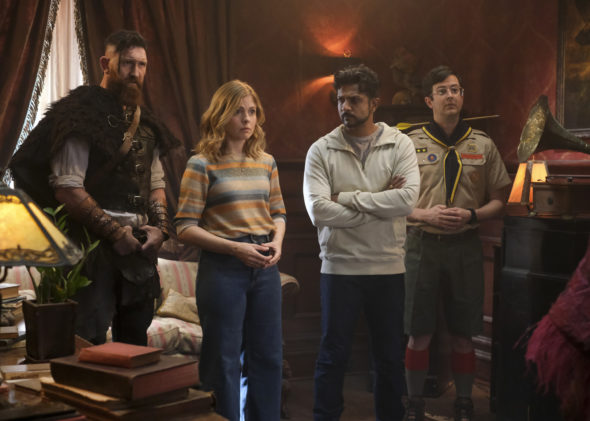 Jay and Sam are open for business. Has the Ghosts TV show been cancelled or renewed for a third season on CBS? The television vulture is watching all the latest cancellation and renewal news, so this page is the place to track the status of Ghosts, season three. Bookmark it, or subscribe for the latest updates. Remember, the television vulture is watching your shows. Are you?

Airing on the CBS television network, the Ghosts TV show stars Rose McIver, Utkarsh Ambudkar, Brandon Scott Jones, Richie Moriarty, Danielle Pinnock, Asher Grodman, Roman Zaragoza, Sheila Carrasco, Rebecca Wisocky, and Devan Chandler Long. Recurring players in season two include Arthur Holden, John Hartman, Betsy Sodaro, Christian Daoust, Rodrigo Fernandez-Stoll, and Ravi Patel. In the story, freelance journalist Samantha (McIver) and up-and-coming chef Jay (Ambudkar) are a couple from New York City. When Sam inherits a rundown country estate in upstate New York, they throw caution to the wind and decide to convert it into a bed & breakfast. The hitch is that the estate is inhabited by numerous spirits of people who’ve died there over the years. The departed souls are a close-knit, eclectic group and are anxious about the commotion that a renovation and a B&B will bring to their home. Their outlook changes when, after an accident, they learn that Sam can see and hear them. In season two, Sam and Jay’s bed & breakfast is now open and the troubles of the estate’s residents are far from over.

The second season of Ghosts averages a 0.55 rating in the 18-49 demographic and 6.41 million viewers in the live+same day ratings (includes all DVR playback through 3:00 AM). Compared to season one, that’s down by 4% in the demo and up by 10% in viewership. While these numbers don’t include further delayed or streaming viewing, they are a very good indicator of how a show is performing, especially when compared to others on the same channel. Though other economic factors are involved, the higher-rated shows usually get renewed and the lower-rated ones get cancelled. Find out how Ghosts stacks up against other CBS TV shows.

Will CBS cancel or renew Ghosts for season three? The show was the network’s highest-rated new show of the 2021-22 season.  The traditional ratings for season two won’t be as high as more people move to shifted viewing, but they’re still quite good. Ghosts is based on a British comedy, but it’s co-produced by CBS Studios. As a result, the network’s parent company, Paramount Global, profits from more than just the traditional TV ad revenue. I have no doubt Ghosts will be renewed for season three. I’ll update this page with breaking developments. Subscribe for free alerts on Ghosts cancellation or renewal news.

What do you think? Do you hope that the Ghosts TV show will be renewed for a third season? How would you feel if CBS cancelled this TV series, instead?

I just binge watched the whole thing last night and I loved it! I hope they do a season 4 for sure!!!

Ghost is the only show I watch, First interesting show in a while. Finally, some imagination. Great show

no one will be sucked off, they are here to stay