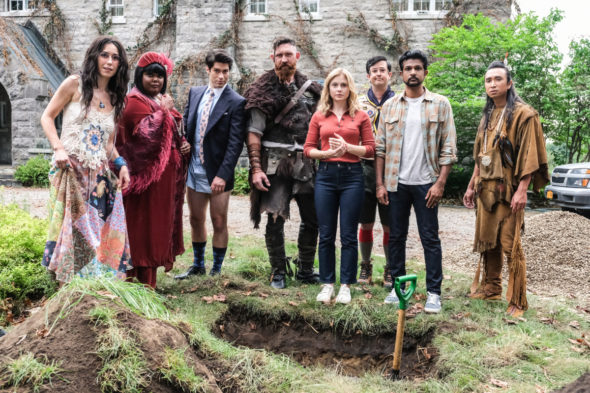 CBS is sticking with Samantha, Jay, and their deceased housemates for the 2022-23 season. The Ghosts series has been renewed for a second season on the network.

The first season of Ghosts averages a 0.58 rating in the 18-49 demographic and 5.75 million viewers in the live+same day ratings (including DVR playback through 3:00 AM). It’s the network’s second-highest rated comedy of the 2021-22 season in total viewers. In the live+7 day delayed viewing, Ghosts picks up 55% more viewers in the demo and 38% more viewers, averaging a 0.90 rating and 7.95 million.

What do you think? Have you tuned in for the Ghosts TV series on CBS? Are you glad to hear that it will be back for a second season?

I am very pleased that “Ghost” has been renewed for another season on CBS. With all the horrible events happening in the United States and around the world, “Ghost” is a refreshing brake from reality. I look forward to season 2. Thank you very much.

I think this show really sucks, it is the most stupidest show ever on TV. You need to keep United States of AL on and cancel Ghost.

Well at least there keeping this one, I love this show and since they canceled united states of al it’s the only good sitcom they now have left the rest of them are all awful.

We enjoy this, and after enjoying a couple of months learned of the British version which we also enjoy. Glad they’ve renewed both here and the other side of the pond.

Thank goodness a decent show has been renewed! I never watch comedies, but there are finally a few out that are not awful. Ghosts is one of the best yet.

My hubby and I Love USA Ghosts sitcom!! Can’t wait for the next seasons !!❤️

Please we’re waiting for the second season. We can’t stop watching and re-watching the 1st season on paramount

Love the show. Best comedy ever. Should be renewed every year

My fiance,my sister and myself are so extremely happy for season 2 and more…love the show and the writers are brilliant and funny

I like this program almost as much as the British series. They are quite different and fun. My dad and I are watching from different households, and always waiting for the next episode.

Last edited 2 months ago by Karen B
1
0
Reply

I love it! Hope it stays around forever. Wish it was on an hour, can’t get enough.

One of my favorite shows. So excited to see it renewed for a second season.

This a fantastic show, so fresh so funny, Rose McIver is amazing.

Thank You, and keep the episodes coming.