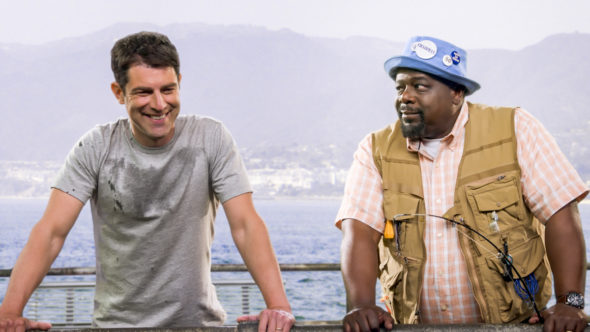 Calvin is stuck with Dave for at least one more season. CBS has renewed The Neighborhood for a fifth year which will air as part of the network’s 2022-23 broadcast schedule.

The fourth season of The Neighborhood averages a 0.62 rating in the 18-49 demographic and 5.39 million viewers. Compared to season three, that’s down by 19% in the demo and down by 3% in viewership in the live+same day ratings (including DVR playback through 3:00 AM). It’s the network’s second-highest rated comedy of the 2021-22 season in the demo and third in viewers. In the live+7 day delayed viewing, The Neighborhood picks up 39% more viewers in the demo and 23% more viewers overall, averaging a 0.86 rating and 6.62 million.

“And on Mondays, the perfect pairing of The Neighborhood and Bob ♥ Abishola continues to deftly blend belly laughs with relatable and culturally relevant storylines, thanks to these exceptionally talented actors and outstanding creative teams,” Kahl continued.

Check out our CBS status sheet to track the Tiffany network’s new series pickups, renewals, and cancellations. You can find lists of cancelled shows here.
What do you think? Do you watch The Neighborhood TV show on Monday nights? Are you glad that this CBS comedy series has been renewed for a fifth season?

This show should have been canceled it’s awful. Can’t believe it’s still on.

Love the show!! I look forward to it every Monday night on CBS!!

Love the Neighbirhood it’s family friendly and so very funny. Glad it’s continuing on its 5th season. I could watch this sitcom forever.

Love The Neighborhood. Glad it’s coming back for another season!

I love all these comedy also hoping b positive and the one with the alfganistan can’t think of name al something.

So glad it’s back. I love the show. If you watched Norman’s genius work then you get this modern day piece of comedic diversity. Love the cast. Keep up. ~Cali way of Detroit.

This is the reason why I completely stop watching TV. It’s just not worth it the quality and just the overall attitude of the producers is let’s just put any piece Nonsense and people will watch it. I no longer pay for TV. And this is one of the reasons why