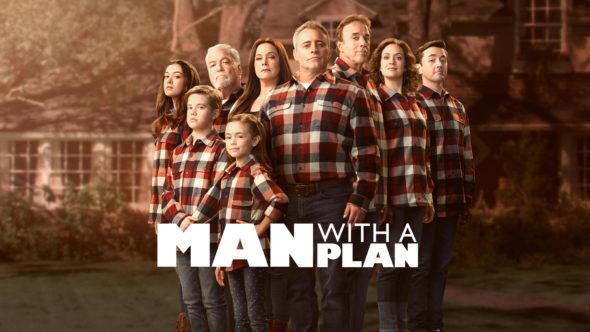 Everything is going according to plan for Adam Burns. CBS has renewed its Man with a Plan TV show for a fourth season. It’s in good company, too. The Tiffany network previously renewed FBI, God Friended Me, Mom, Young Sheldon, Magnum, P.I., and Criminal Minds.

The third season of Man with a Plan averaged a 0.87 rating in the 18-49 demographic and 5.33 million viewers. Compared to season two, that’s down by 12% in the demo and down by 8% in viewership.

In terms of its demo numbers, Man with a Plan ranks 10th out of the 26 scripted CBS TV shows. It drops to 20th place, when sorted by total audience. CBS sets high standards for its comedies, but its audience skews older, so those demo numbers are likely responsible for saving this TV show.

What do you think? Are you a fan of the Man with a Plan TV series? Will you tune in for the fourth season on CBS?

Stacey Keach is the star, every time he opens his mouth it’s funny

Glad it’s coming back. It has a good cast and they all mesh well.

Yes I will be watching. There are very few comedy shows to watch where you can forget and just laugh.

Man with a plan has become a family favorite in our house! I am so excited to see where they take us. Love it so much

I like this show and hope there is a 4 th season.

I like this show but ratings aren’t great. It premieres so late in the season and then Season 3 only offered 13 episodes so no wonder the ratings are hurting. Not a lot of people have ever heard of it even after 3 years. CBS isn’t doing the show many favors. Glad we’re getting a season 4 though!

I love this show, I started watching it just by chance, I’ve never seen an episode on tv and I’ve never even heard of it until searching on CBS All Access. They really need to get some commercials or something, I think this shows great, especially Adam’s father.