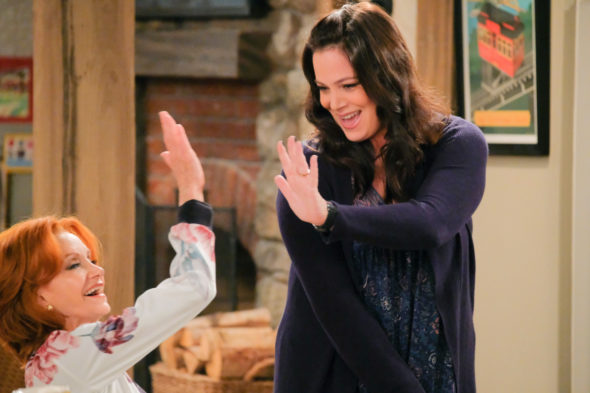 How is Adam’s plan panning out during the third season of the Man with a Plan TV show on CBS? As we all know, the Nielsen ratings typically play a big role in determining whether a TV show like Man with a Plan is cancelled or renewed for season four. Unfortunately, most of us do not live in Nielsen households. Because many viewers feel frustration when their viewing habits and opinions aren’t considered, we’d like to offer you the chance to rate all the Man with a Plan season three episodes for us here. **Status update below.

A CBS sitcom, Man with a Plan stars Matt LeBlanc as an old-school contractor named Adam, who is trying to adapt to the demands of modern family life. The cast also includes Liza Snyder, Kevin Nealon, Stacy Keach, Grace Kaufman, Matthew McCann, Hala Finley, Matt Cook, and Kali Rocha. Now Adam and his wife, Andi (Snyder), are running a house-flipping business with his brother, Don (Nealon) and friend, Lowell (Cook), with a surplus of input from his other family and friends.

What do you think? Which season three episodes of the Man with a Plan TV series do you rate as well planned, slapped together, or somewhere between? Should CBS have cancelled or renewed Man with a Plan for a fourth season? Don’t forget to vote, and share your thoughts, below.

That is so crazy I love that show we need comedy,everything’s so sad and crazy out there people need to laugh

Happy that ‘Man with a Plan’ has been renewed, but we are waiting to watch the new shows. Where are the shows? When does it come on again? Feels like almost a year ago when we saw the last show. Peace, Marc

With so much violence playing as entertainment for American’s it is no wonder society is headed the wrong direction. Family shows, programs with integrity and values could go a long way in helping people believe doing the right thing, the honest, caring thing is the way to go in life. Don’t make everyone a victim, just do the right thing because it is the right thing to do.

This is a very good show! It is pretty Funny! Like the interactions with all of the actors in the show. Keep renewing! Peace, Marc

cancel its not hood anymore, who cares about jokes that are sexual thats what this world is like donyou not get out and realize its 2019

I am very happy Man With A Plan is back. Friends is the biggest show on the planet. It is smart of CBS to have Matt LeBlanc on TV. I love Liza, Kevin, Matt Cook, Stacy, Swoosie, Kali, and the kids. It’s nice to have a nice family drama that doesn’t center around race and sex jokes every episode.

Scotty said exactly my sentiments! It’s ashame that we don’t have more shows like this one with good actors!