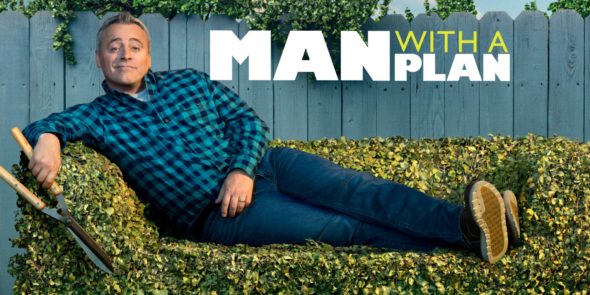 On the air since 2016, Man with a Plan has been a middle-of-the-road performer for CBS. This time around, the sitcom is launching very late in the season. Could this late start date and the current pandemic help the series get discovered by new viewers or, will the ratings fall lower? Will Man with a Plan be cancelled or renewed for season five? Stay tuned. *Status update below.

6/12 update: You can see the latest night’s ratings in context.

For comparisons: Season three of Man with a Plan on CBS averaged a 0.87 rating in the 18-49 demographic and 5.33 million viewers.

What do you think? Do you like the Man with a Plan TV series on CBS? Should it be cancelled or renewed for a fifth season?

Every show I find amusing, it’s gets canceled. First “the Santa Clarita diet”, now “man with a plan”. These are two shows that I would watch, the cast works well together on giving amusing anecdotes and one liners to make anyone laugh! Bring it back!

This is the reason, people are going to netflix. Keep Man With a Plan !!!

Look at the ratings of Man With A Plan !!!! It is 4.95, That is better than most shows.
What is wrong with you people closing that show? Take another look at the show.
Please bring it back, me & my friends love that show. All the actors were perfect picks.!!!!!

You leave on shows with NO MORAL values like MOM and take off shows that are funny like Man with a Plan..
I mean really. What are you thinking. Nothing you are thinking with spam brain evidently!!! No more CBS for all my family and friendsover400

After this I’m no longer watching CBS network television! Canceling the show and allowing Other shows just annoys me. If you look at the lineup for CBS from now until next year it’s awful and I’m no longer going to watch this network ever again. Just because a producer has two other comedy shows .Doesn’t mean he deserves a third should be granted to him enough of this favoritism to certain producers they need to stop this and start producing with people one not garbage!