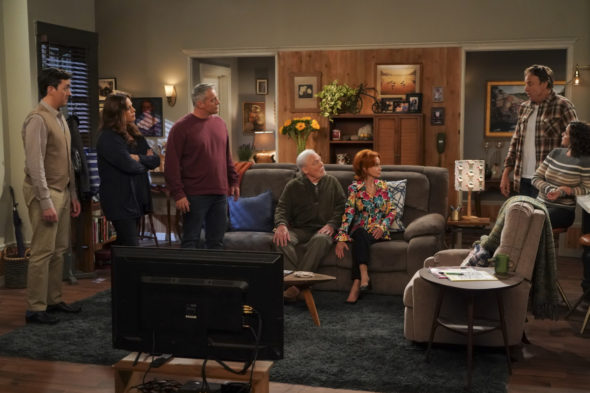 Is it too late for this show to be a hit? Has the Man with a Plan TV show been cancelled or renewed for a fifth season on CBS? The television vulture is watching all the latest cancellation and renewal news, so this page is the place to track the status of Man with a Plan, season five. Bookmark it, or subscribe for the latest updates. Remember, the television vulture is watching your shows. Are you?

The fourth season of Man with a Plan averaged a 0.70 rating in the 18-49 demographic and 5.83 million viewers. Compared to season three, that’s down by 20% in the demo and up by 9% in viewership. Find out how Man with a Plan stacks up against other CBS TV shows.

Will CBS cancel or renew Man with a Plan for season five? The series has been a middle-of-the-road performer for the network and a fifth season will give it enough episodes for a good-sized syndication package. I think it will be renewed. I’ll update this page with breaking developments. Subscribe for free alerts on Man with a Plan cancellation or renewal news.

What do you think? Were you hoping the Man with a Plan TV show would be renewed for a fifth season? Are you sorry that CBS cancelled this TV series, instead?

This is a good show and should not be cancelled. Please renew this show ‘Man with a Plan’. Thanks! Peace, Marc

It is not the first time that Stupid senior executives from CBS cancel a show to let a friend put his own show on TV. They do not care about good shows. They only care about how much money it brings to their pockets.

CBS needs to keep man with a plan. Funny and contagious

What a disappointment. There are so many trashy shows that are kept & the decent ones like “ Man With a Plan” is cancelled.

Funny show — much better than a lot of shows being renewed. Well done, CBS!

Why cancel a great show and keep the stupid ones !!

I am so incredibly upset that this show has been cancelled!! Y’all get a good show and then cancel it.. Makes no sense!! Please renew it!!

It is a really funny show and hope it will be renewed. Mat is as good as ever and also the entire cast!