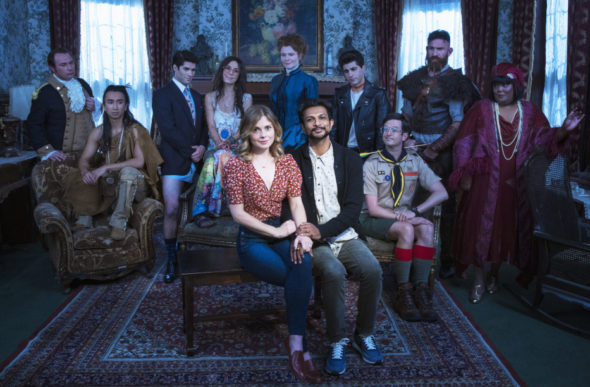 TV show description:
A single-camera supernatural comedy series, the Ghosts TV show is based on the British comedy of the same name. It was created by Mathew Baynton, Simon Farnaby, Martha Howe-Douglas, Jim Howick, and  Laurence Rickard & Ben Willbond.

Freelance journalist Samantha (McIver) and Jay (Ambudkar), an up-and-coming chef, are a couple from the city. They throw caution (and their money) to the wind when they decide to convert a huge rundown country estate they inherited into a bed & breakfast. They discover the hitch is that it’s inhabited by many spirits of deceased residents.

If the spirits were anxious about the commotion that a renovation and a B&B would create in their home, it’s nothing compared to what happens when they realize that Samantha is the first live person who can see and hear them.

What do you think? Do you like the Ghosts TV show? Do you think it should be cancelled or renewed for another season?

The show started out funny and entertaining, now it has gotten monotonous.

I love the tv show ghost please renew it

I went back to see if this had changed into something funny. Nope. I simply cannot understand why this show is still on. The acting is good, but the stories and lines are just not funny. However, I did find out how one character lost his pants. And that wasn’t funny either.

I really enjoy this show, one of my favorites to watch. This comedy is one of the best

Best half hour show on TV and better than most hour long!