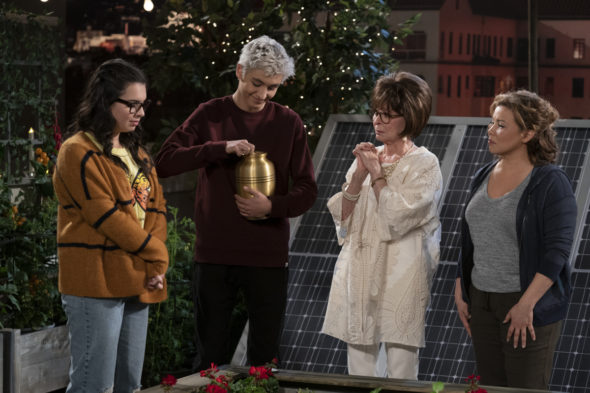 One Day at a Time is done. The series, which was cancelled for a second time last month, will not find a new home. The first three seasons of the sitcom aired on Netflix before it was cancelled. The series was then picked up by Pop TV, and seven episodes of season four aired on that cable channel. In a surprising move, due to the pandemic, six episodes of the fourth season also aired on CBS.

The comedy is a reboot of the 1970s sitcom which follows a single mom dealing with raising two teens with her mother living under the same roof. Justina Machado, Todd Grinnell, Izabella Gomez, Marcel Ruiz, Stephen Tobolowsky, and Rita Moreno star in the series.

Sony Pictures TV did try to find a new home for the sitcom, but the cast was informed on Tuesday that the series could not be saved.

“It’s officially over. There will be no new  @OneDayAtATime episodes. But there will always be 46 episodes that we got to make that live FOREVER. Thank you to this beautiful cast. Our dedicated crew. And to you, our loyal fans. We loved making this for you. Thank you for watching.”

Calderon Kellett also teased what fans would have seen in the fifth season of One Day at a Time:

“Obviously, we would absorb (the unproduced storylines); we have so many beautiful episodes. There was the one that Justina was going to direct, which is another beautiful religion episode, which we would love to put into Season 5 and give her that directing debut and also a beautiful script written by Sebastian Jones and so many other really wonderful storylines that we really, really want to do, in terms of Elena figuring out where she’s going to school and really what’s going to be happening to these kids, as well as what Penelope’s love life looks like now with Max, their sort of modern relationship. We have so much more to tell, and especially with everything that’s going on in this world, every day, I’m like, oh my gosh, Elena would say this. Elena would say that. Elena would say this. It’s just ripe with things that this family would be talking about.”

What do you think? Are you sad that One Day at a Time did not find a new home? Would you have watched a fifth season?

I’m sad to see all the hurdles this show went through. It had so much to share regarding the new normal in society. I would definitely have kept watching it.

Good riddance to this horrific work. And to these clearly narcissistic self-congratulating writers who think they are such stellar people. (They’re not.) This show reflected poor writing and pretentious sanctimony throughout.

enjoyed the show the first time many years ago so was looking forward to the reboot. It was enjoyable and relevant to today’s issues along for a steppingstone to family discussion

Don’t understand reasons for cancelling show. Soon there will be no reason to watch regular tekevision.

Damn right we are sad. Why would they do such a thing? We need it.