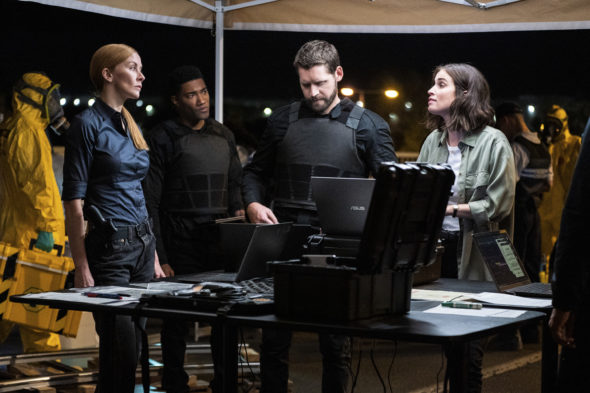 This team is protecting American interests abroad. Has the FBI International TV show been cancelled or renewed for a third season on CBS? The television vulture is watching all the latest cancellation and renewal news, so this page is the place to track the status of FBI International, season three. Bookmark it, or subscribe for the latest updates. Remember, the television vulture is watching your shows. Are you?

Airing on the CBS television network, the FBI: International TV show is the second spin-off in the FBI franchise and stars Luke Kleintank, Heida Reed, Carter Redwood, Vinessa Vidotto, and Eva-Jane Willis. The story follows the elite operatives of the Federal Bureau of Investigation’s International Fly Team. Headquartered in Budapest, they travel the world with the mission of tracking and neutralizing threats against American citizens wherever they may be. They put their lives on the line to protect the U.S. and its people. Special Agent Scott Forrester (Kleintank) is the Fly Team’s accomplished and dedicated leader and his second in command is Special Agent Jamie Kellett (Reed). Special Agent Andre Raines (Redwood) shines in the field and makes good use of his accounting background while Special Agent Cameron Vo (Vidotto) excels at interrogation and strategy. Newly embedded with the Fly Team is Megan “Smitty” Garretson (Willis). She’s a streetwise Europol agent with an extensive undercover background and liaises with each host country they inhabit.

66The second season of FBI International averages a 0.49 rating in the 18-49 demographic and 5.66 million viewers in the live+same day ratings (includes all DVR playback through 3:00 AM). Compared to season one, that’s down by 8% in the demo and down by 5% in viewership. While these numbers don’t include further delayed or streaming viewing, they are a very good indicator of how a show is performing, especially when compared to others on the same channel. Though other economic factors are involved, the higher-rated shows usually get renewed and the lower-rated ones get cancelled. Find out how FBI International stacks up against other CBS TV shows.

We don’t have to wonder if CBS will cancel FBI International since the show’s already been renewed for a third season. I’ll update this page with breaking developments. Subscribe for free alerts on FBI International cancellation or renewal news.

What do you think? Are you glad that the FBI International TV show has been renewed for a third season? How would you feel if CBS had cancelled this TV series, instead?

This is a great show. We were really excited to see it return on Tuesday!!