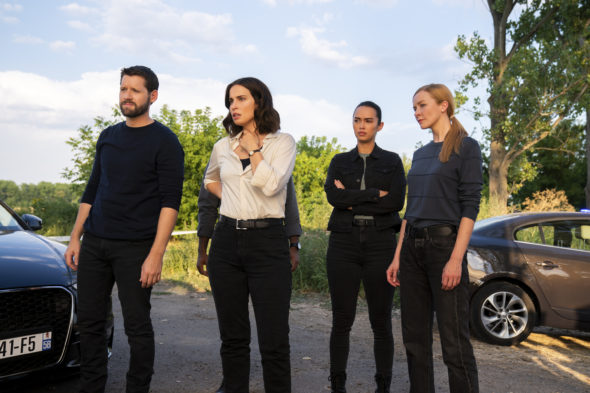 A CBS procedural drama series, the FBI: International TV show is the second spin-off in the FBI franchise and stars Luke Kleintank, Heida Reed, Carter Redwood, Vinessa Vidotto, and Eva-Jane Willis. The story follows the elite operatives of the Federal Bureau of Investigation’s International Fly Team. Headquartered in Budapest, they travel the world with the mission of tracking and neutralizing threats against American citizens wherever they may be. They put their lives on the line to protect the U.S. and its people. Special Agent Scott Forrester (Kleintank) is the Fly Team’s accomplished and dedicated leader and his second in command is Special Agent Jamie Kellett (Reed). Special Agent Andre Raines (Redwood) shines in the field and makes good use of his accounting background while Special Agent Cameron Vo (Vidotto) excels at interrogation and strategy. Newly embedded with the Fly Team is Megan “Smitty” Garretson (Willis). She’s a streetwise Europol agent with an extensive undercover background and liaises with each host country they inhabit.

What do you think? Which season two episodes of the FBI International TV series do you rate as wonderful, terrible, or somewhere between? Are you glad that FBI International has been renewed for a third season on CBS?

Thank you CBS for a Great ‘FBI International’ show! All of the actors are fantastic! Looking forward to many more Seasons to come. ~ Peace, Marc