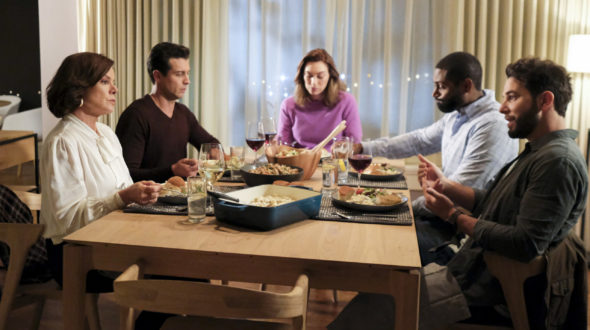 CBS is trying something a little different with So Help Me Todd. Will this new TV show be cancelled or renewed for a second season on CBS? The television vulture is watching all the latest cancellation and renewal news, so this page is the place to track the status of So Help Me Todd, season two. Bookmark it, or subscribe for the latest updates. Remember, the television vulture is watching your shows. Are you?

Airing on the CBS television network, the So Help Me Todd TV show stars Marcia Gay Harden, Skylar Astin, Madeline Wise, Tristen J. Winger, Inga Schlingmann, and Rosa Arredondo. In the story, Margaret Wright (Harden) is a razor-sharp and successful attorney who is reeling from the recent dissolution of her marriage. Her son Todd (Astin) is a quick-thinking former private detective who’s fallen on hard times after his “flexible interpretation of the law” got his license revoked. Though Margaret’s high standards and strict adherence to the law are at complete odds with Todd’s scrappy and seat-of-his-pants methods, she asks him to join her firm as the in-house investigator. Mother and son working together is a big first step toward mending their fragile and dysfunctional relationship. They may even come away with a better understanding of each other at this pivotal point in their lives.

The first season of So Help Me Todd averages a 0.34 rating in the 18-49 demographic and 4.42 million viewers in the live+same day ratings (including DVR playback through 3:00 AM). While these numbers don’t include further delayed or streaming viewing, they are a very good indicator of how a show is performing, especially when compared to others on the same channel. There can be other economic factors involved in a show’s fate, but typically the higher-rated series are renewed and the lower-rated ones are cancelled. Find out how So Help Me Todd stacks up against other CBS TV shows.

Will CBS cancel or renew So Help Me Todd for season two? Breaking with tradition, the network decided to abandon sitcoms for the Thursdays at 9 PM hour and try a new legal drama instead. CBS has plenty of procedural dramas, but legal dramas are not the same thing. Establishing a new drama, especially one that’s not a spin-off, is tough these days, but I suspect this one’s got a very good chance of surviving. I’ll update this page with breaking developments. Subscribe for free alerts on So Help Me Todd cancellation or renewal news.

What do you think? Do you hope that the So Help Me Todd TV show will be renewed for a second season? How would you feel if CBS cancelled this TV series, instead?

They got a full first season order in October, but no word on season two yet.

People are too lazy these days to watch a show that starts off slow. If it takes 3 episodes or more to create a storyline that’s eye-catching, then that show will never make it. The vast majority of viewers base whether they like and thus will continue watching a series based on the pilot. For example, when I watched Prime Videos first episode of “The Peripheral”, it had so much action that it made me so excited that it left me on the edge of my seat waiting for next week’s episode to be aired. “The House of the Dragon”… Read more »

Last edited 24 days ago by Sandy
1
0
Reply
Back. The show was starting to get a little stale