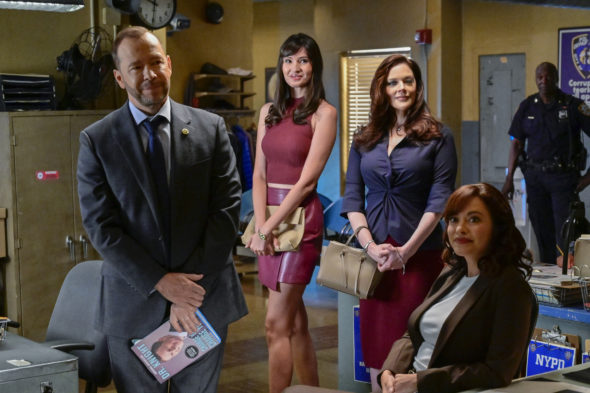 The Reagans always have plenty to talk about, both at work and at home. Has the Blue Bloods TV show been cancelled or renewed for a 14th season on CBS? The television vulture is watching all the latest cancellation and renewal news, so this page is the place to track the status of Blue Bloods, season 14. Bookmark it, or subscribe for the latest updates. Remember, the television vulture is watching your shows. Are you?

The 13th season of Blue Bloods averages a 0.41 rating in the 18-49 demographic and 6 million viewers. Compared to season 12, that’s down by 0.41% in the demo and down by 1% in viewership in the live+same day ratings (including DVR playback through 3:00 AM). While these numbers don’t include further delayed or streaming viewing, they are a very good indicator of how a show is performing, especially when compared to others on the same channel. There can be other economic factors involved in a show’s fate, but typically the higher-rated series are renewed and the lower-rated ones are cancelled. Find out how Blue Bloods stacks up against other CBS TV shows.

Will CBS cancel or renew Blue Bloods for season 14? This police drama continues to attract a lot of viewers, even though it airs on Friday nights at 10 PM. Episodes also pick up 60-70% more viewers in the live+7 day ratings. At some point, I expect Selleck to limit his involvement or leave the series, but I think Blue Bloods could still continue. I think a 14th-season renewal is very likely. I’ll update this page with breaking developments. Subscribe for free alerts on Blue Bloods cancellation or renewal news.

What do you think? Do you hope that the Blue Bloods TV show will be renewed for a 14th season? How would you feel if CBS cancelled this TV series, instead?

Best TV show I have ever followed.. I and my entire family.. watch it religiously.. hope to continue for MANY YEARS TO COME

My late night go-to. Do not cancel!

Don’t cancel, love the family thing going on. And the actors & actresses.

The best, wholesome TV show today. Do not cancel. Looking forward to further growth of storylines.

Yes. Blue Bloods is the very best tv show ever!

Absolutely renew! Best TV crime series and drama! Great actors and actresses with the best family chemistry. Of course all good things do come to an end, and when that very distant year comes, i will mourn the loss of good social and family values. I can envision a day when Frank leaves to take a road trip mission to check on his old friend: Jessie Stone{who may be in real trouble with a dangerous crime ring. But the Reagan family, sons and grandsons/ frontline, with the rest in critical position support will be following up.}