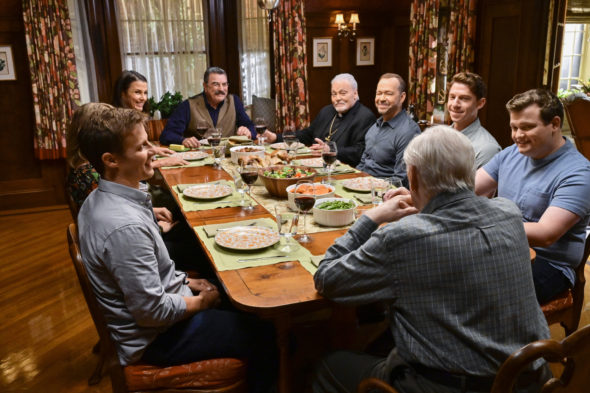 The beloved family dinners will continue in the 13th season of the Blue Bloods TV show on CBS. As we all know, Nielsen ratings typically play a big role in determining whether a TV show like Blue Bloods is cancelled or renewed for season 14. Unfortunately, most of us do not live in Nielsen households. Because many viewers feel frustrated when their viewing habits and opinions aren’t considered, we invite you to rate all of the 13th season episodes of Blue Bloods here.

What do you think? Which season 13 episodes of the Blue Bloods TV series do you rate as wonderful, terrible, or somewhere between? Do you think that Blue Bloods should be cancelled or renewed for a 14th season on CBS?

Good drama! Enjoyed: On Dangerous Ground! A little new drama building on emotions to explore. Negative emotions do exist in the best of relationships. Positive emotions are often hot. But this time the show’s title: Blue bloods, Spiritually, a negative(or cold.) Words that come to mind are Pride and Pettiness. Everyone is guilty of the two. But if exhibited repeatedily, then there is the negative emotion of being overly sensitive and “making a mountain out of a molehill.” Such emotions can be a divider, sepparating us. Spiritually i think of 2 corinthians 2:10-11. Enjoyed the dialogue with Frank and Staff,… Read more »

Where did Blue Bloods Detective Baez get her BABY??

L oved it!!! Love to see Danny and Jamie have different opions as they always work it out as it is normal among brothers which makes this family orientated . Loved seeing Joe again he is a good actor and a great addition to the family. Always a wonderful show to watch as always. Keep it coming as usual the acting is great and they all fit their part.

Enjoyed “Homefront” Enjoyed the inter-relationship between the Blue Blood characters as they engaged to negotiate life law enforcement/crime difficulties. Characters: Henry & Frank brought up a law enforcement concept that applies to reality. A “broken toy” policeman unit is one made up of individuals who in a law enforcement capacity had suffered emotional and spiritual loss, such as from previous military service; and still has functional physical and mental persona qualities so as to serve the publically, righteously fighting evils and crimes. Such individuals deserve respect and prayer as long as their actions are lawful and justified. The lifestyle of… Read more »

Yes you go Baker I loved it to see one of the other great actors have a little more to say and do. Also the way Frank took care of the situation about being harrassed {his father} was excellent Always drama that keeps one on their toes which is great!!!!! Just LOVE LOVE this show and please keep it coming. Also love the way the captain took Eddie’s side towards the end there which makes me think that she might come around after all and be okay.

another great episode as usual. Loved it how Baker stood up for herself I love this show and the drama is great as usual. Please keep this show going as usual as it’s the best ever.

I love BlueBloods, please renew it as I never miss it on Friday nights.