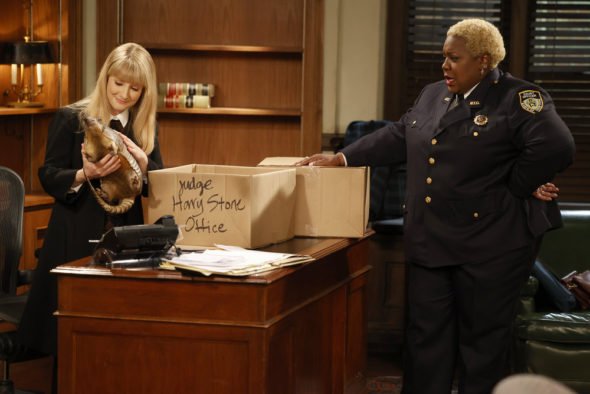 Abby’s got her work cut out for her. Has the Night Court TV show been cancelled or renewed for a second season on NBC? The television vulture is watching all the latest cancellation and renewal news, so this page is the place to track the status of Night Court, season two. Bookmark it, or subscribe for the latest updates. Remember, the television vulture is watching your shows. Are you?

A workplace comedy series airing on the NBC television network, the Night Court TV show stars Melissa Rauch, India de Beaufort, Kapil Talwalkar, Lacretta, and John Larroquette and is a sequel to the 1984-92 sitcom of the same name. The new story follows Abby Stone (Rauch), a judge following in the footsteps of her revered late father, Judge Harry Stone (Harry Anderson). She takes on the challenge of overseeing the night shift of a Manhattan arraignment court, just as he did. To bring order and dignity to the court, she enlists former night court district attorney Dan Fielding (Larroquette) to serve as the court’s public defender. Others on the team include Olivia (De Beaufort), the court’s officious and ambitious assistant district attorney; Neil (Talwalker), the court’s neurotic clerk; and Donna “Gurgs” Gurganous (Lacretta), the sharp-witted bailiff.

The first season of Night Court averages a 0.89 rating in the 18-49 demographic and 6.56 million viewers. While these numbers don’t include further delayed or streaming viewing, they are a very good indicator of how a show is performing, especially when compared to others on the same channel. There can be other economic factors involved in a show’s fate, but typically the higher-rated series are renewed and the lower-rated ones are cancelled. Find out how Night Court stacks up against other NBC TV shows.

Will NBC cancel or renew Night Court for season two? The network has very few comedies, and this one is based on a familiar title so that would seem to improve this show’s chances of survival. On the other hand, NBCUniversal doesn’t own the Night Court brand — Warner Bros. Discovery does. If a series isn’t drawing big ratings, the ownership of a show can be a deciding factor in a show’s fate. The show got off to a great start so we’ll have to see how the rest of the season performs. I’ll update this page with breaking developments. Subscribe for free alerts on Night Court cancellation or renewal news.

What do you think? Do you hope that the new Night Court TV show will be renewed for a second season? How would you feel if NBC cancelled this TV series, instead?