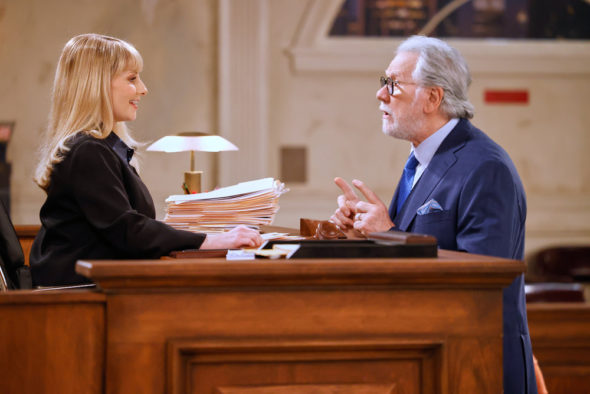 TV show description:
A comedy series, the Night Court TV show was developed by Dan Rubin. It’s a sequel to the 1984-92 NBC sitcom of the same name created by Reinhold Weege.

The new story follows Abby Stone (Rauch), a judge following in the footsteps of her revered late father, Judge Harry Stone (Harry Anderson). She takes on the challenge of overseeing the night shift of a Manhattan arraignment court, just as he did. Abby always sees the best in people, and her passion for justice is undeniable.

In her quest to bring order and dignity to the court, as well as to reign in its colorful crew of oddballs, Abby enlists former night court district attorney Dan Fielding (Larroquette) to serve as the court’s public defender. Still exceedingly self-confident, Fielding must adjust to a new boss and job – being on the other side of cases and defending the downtrodden.

They must contend with Olivia (De Beaufort), the court’s officious assistant district attorney. Driven and ambitious, she views the night court as a stepping stone to bigger things.

Neil (Talwalker) is the court’s neurotic clerk who loved that his job comes with low expectations. That is until a new idealistic judge appeared, looking to push him out of his comfort zone.

What do you think? Do you like the new Night Court TV show? Do you think it should be cancelled or renewed for another season?

Original Night Court funny and great cast, this one not at all. Despite annoying laugh track not one bit funny. John Larroquette wasted rest of cast terrible, writing is terrible. Time to hang this one up.

Hmm, ok, Larroquette is on it, but Moll is not. Without him, it’s not Night Court.

Night Court wasn’t funny at all, cancel it.