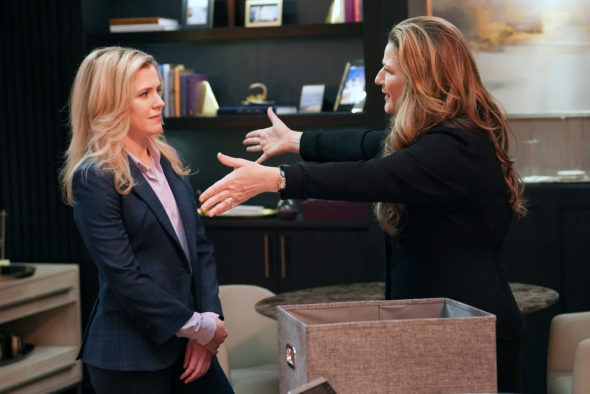 NBC is hoping this midseason comedy won’t run out of gas. Has the American Auto TV show been cancelled or renewed for a third season on NBC? The television vulture is watching all the latest cancellation and renewal news, so this page is the place to track the status of American Auto, season three. Bookmark it, or subscribe for the latest updates. Remember, the television vulture is watching your shows. Are you?

A workplace comedy series airing on the NBC television network, the American Auto TV show stars Ana Gasteyer, Harriet Dyer, Jon Barinholtz, Humphrey Ker, Michael B. Washington, Tye White, and X Mayo. Set in Detroit, the story finds the corporate executives of Payne Motors at a crossroads — adapt to the changing times or be sent to the junkyard. Shaking things up is the new CEO, Katherine Hastings (Gasteyer), whose leadership, experience, and savvy is only slightly offset by her complete lack of knowledge about cars. Those also working at the company include Sadie (Dyer), the type-A head of communications; Dori (X Mayo), the sweet assistant to the CEO; Cyrus (Washinton), the Chief Producer Designer; Elliot (Ker), the Chief Sales Officer; Wesley (Barinholtz), the direct descendant of the company’s founder; and Jack (White), an assembly line worker. From the corporate office to the factory floor, the crew of Payne Motors is driving home the laughs.

The second season of American Auto averages a 0.35 rating in the 18-49 demographic and 2.42 million viewers. Compared to season one, that’s down by 5% in the demo and up by 12% in viewership in the live+same day ratings (includes DVR playback through 3:00 AM). While these numbers don’t include further delayed or streaming viewing, they are a very good indicator of how a show is performing, especially when compared to others on the same channel. There can be other economic factors involved in a show’s fate, but typically the higher-rated series are renewed and the lower-rated ones are cancelled. Find out how American Auto stacks up against other NBC TV shows.

Will NBC cancel or renew American Auto for season three? The show drew mediocre ratings in its first season
but was still the network’s second-highest-rated comedy. The series now has Night Court as a lead-in and that should help bring American Auto more viewers. I think there’s a good chance that the show will be renewed for a third season. I’ll update this page with breaking developments. Subscribe for free alerts on American Auto cancellation or renewal news.

What do you think? Do you hope the American Auto TV show will be renewed for a third season? How would you feel if NBC cancelled this TV series, instead?