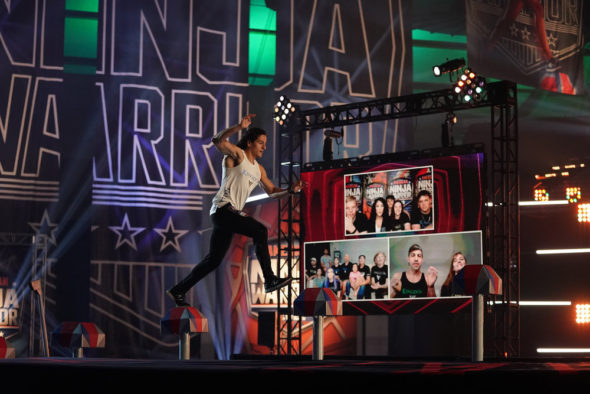 How many egos will be badly bruised this season? Has the American Ninja Warrior TV show been cancelled or renewed for a 14th season on NBC? The television vulture is watching all the latest cancellation and renewal news, so this page is the place to track the status of American Ninja Warrior, season 14. Bookmark it, or subscribe for the latest updates. Remember, the television vulture is watching your shows. Are you?

Airing on the NBC television network, American Ninja Warrior is hosted by Matt Iseman, Akbar Gbajabiamila, and sideline reporter Zuri Hall. The TV show is a high-octane obstacle course competition. Season 13 features more than 400 competitors and, for the first time in ANW history, the age limit to compete is being lowered to 15 years old. Ninja Warrior is a sport that has been rapidly growing across the country and kids of all ages are embracing it in record numbers. A top prize of $1 million will go to the winner if they can conquer all four stages at the National Finals in Las Vegas. To get there, competitors will need to make it through the qualifying rounds and semifinals.

The 13th season of American Ninja Warrior averaged a 0.50 rating in the 18-49 demographic and 3.32 million viewers. Compared to season 12, that’s down by 2% in the demo and up by 10% in viewership in the live+same day ratings (including DVR playback through 3:00 AM). While these numbers don’t include further delayed or streaming viewing, they are a very good indicator of how a show is performing, especially when compared to others on the same channel. There can be other economic factors involved in a show’s fate, but the higher-rated series are typically renewed and the lower-rated ones are cancelled. Find out how American Ninja Warrior stacks up against other NBC TV shows.

What do you think? Are you glad that the American Ninja Warrior TV show has been renewed for a 14th season? How would you feel if NBC had cancelled this TV series, instead?

America ninja warrior is my favorite show, it the only show on TV worth watching, I hope there is a season 14, and many more after that.