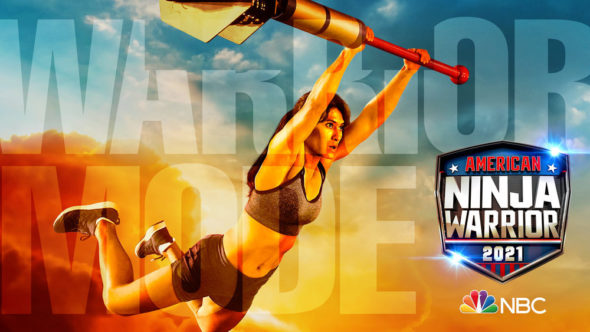 Due to the pandemic, NBC ended up airing two cycles of the American Ninja Warrior TV series during the 2020-21 broadcast season. Is this one too many cycles for the viewing audience or, is there an appetite for American Ninja Warrior airing twice a year? Will the show be cancelled or renewed for season 14? Stay tuned. *Status update below.

American Ninja Warrior is hosted by Matt Iseman, Akbar Gbajabiamila, and sideline reporter Zuri Hall. The TV show is a high-octane obstacle course competition. Season 13 features more than 400 competitors and, for the first time in ANW history, the age limit to compete is being lowered to 15 years old. Ninja Warrior is a sport that has been rapidly growing across the country and kids of all ages are embracing it in record numbers. A top prize of $1 million will go to the winner if they can conquer all four stages at the National Finals in Las Vegas. To get there, competitors will need to make it through the qualifying rounds and semifinals.

For comparisons: Season 12 of American Ninja Warrior on NBC averaged a 0.51 rating in the 18-49 demographic and 3.02 million viewers.

What do you think? Do you like the American Ninja Warrior TV series on NBC? Should it be cancelled or renewed for a 14th season?

I still hold a candle to American Ninja Warrior. I do feel like the show is not the same because: 1) too many stories and not enough of the game 2) the powers that be micromanage the game so certain favorites to move forward and win over other people. 3) NBC made it too difficult for the contestants to win the mountain prize, hence everyone losing and fans watching leave the show disappointed every season 4) they had a separate ranking list for women and men instead of them competing on the same list (top 5 first round, then top… Read more »

The show is great, the athletes are great. WHAT ISN’T GREAT IS THE FACT THAT THE SHOW HAS MADE BILLIONS OF DOLLARS & ONLY PAID OUT ABOUT 3 MILLION DOLLARS. They tout great stories on cancer, diabetes, MS, etc, but they screw everyone over when it comes to money. They add challenges that no one can complete twice in a row to eliminate the people w the talent to win… SPLIT DECISION & REVERSE GRAB this yr… Cheap ********…. It’s to the point I don’t want to watch. Hard to turn down Ms Magnificent Jessi Graff, Mr consistent Weatherman, etc…… Read more »

I have watched every episode of every season. What is driving my family away this year is that you should not have lowered the age to allow kids who weigh about half of what the adults weigh to compete. You should have left them in the age brackets so they can compete against kids their own age. And enough of the lengthy back stories. What, are you running out of contestants or something. We love the show , but put it back like it was , adults against adults and kids against kids.

They’ve lost a lot of viewers over the years. I didn’t watch this year because my favorite Ninja that’s been there since the beginning isn’t going to be there. I was curious about the lowering of the age requirements to see who would qualify but I decided I had too much to do and was already watching too many other shows. I think a lot of things hurt the show. When they changed the requirements for the women that was disappointing because so many other women showed that they could compete on the same level with the men. I always… Read more »

I think you should make ANW more fair. You have different challenges each time. Therefore some contestants have easier than others. They should all have the same challenges in the qualifying round then others in the finals.

Maybe it is just me, but the show is getting old. Same stuff year after year. Going to stop watching.