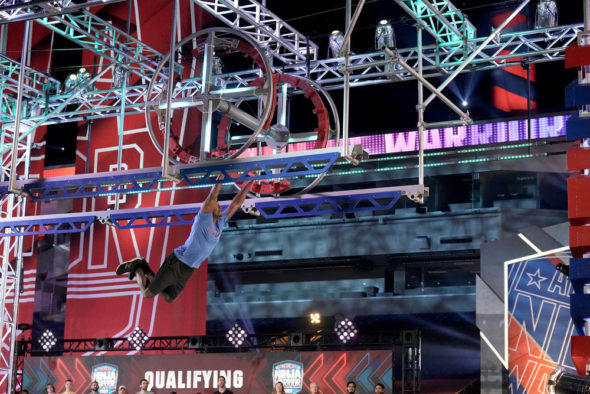 Will anyone make it through all six courses this year? Has the American Ninja Warrior TV show been cancelled or renewed for a 15th season on NBC? The television vulture is watching all the latest cancellation and renewal news, so this page is the place to track the status of American Ninja Warrior, season 15. Bookmark it, or subscribe for the latest updates. Remember, the television vulture is watching your shows. Are you?

Airing on the NBC television network, the American Ninja Warrior TV show is hosted by Matt Iseman and Akbar Gbajabiamila with Zuri Hall reporting from the sidelines. Over the run of the series, the obstacle courses continue to evolve and become even more challenging for competitors who now are as young as 15-years-old. To stay in the competition, contestants need to make it through the city qualifying rounds and semifinals. A top prize of $1 million goes to the winner that can conquer all four stages at the National Finals in Las Vegas.

The 14th season of American Ninja Warrior averages a 0.40 rating in the 18-49 demographic and 2.92 million viewers. Compared to season 13, that’s down by 21% in the demo and down by 12% in viewership in the live+same day ratings (including DVR playback through 3:00 AM). While these numbers don’t include further delayed or streaming viewing, they are a very good indicator of how a show is performing, especially when compared to others on the same channel. There can be other economic factors involved in a show’s fate, but typically the higher-rated series are renewed and the lower-rated ones are cancelled. Find out how American Ninja Warrior stacks up against other NBC TV shows.

What do you think? Do you hope that the American Ninja Warrior TV show will be renewed for a 15th season? How would you feel if NBC cancelled this TV series, instead?