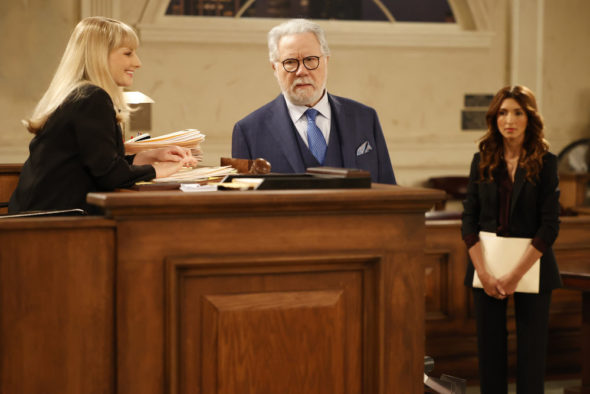 Abby has big shoes to fill in the new Night Court TV series on NBC. As we all know, Nielsen ratings typically play a big role in determining whether a TV show like Night Court is cancelled or renewed for season two. Unfortunately, most of us do not live in Nielsen households. Because many viewers feel frustrated when their viewing habits and opinions aren’t considered, we invite you to rate all of the first season episodes of Night Court here.

An NBC workplace comedy series, the Night Court TV show stars Melissa Rauch, India de Beaufort, Kapil Talwalkar, Lacretta, and John Larroquette and is a sequel to the 1984-92 sitcom of the same name. The new story follows Abby Stone (Rauch), a judge who’s following in the footsteps of her revered late father, Judge Harry Stone (Harry Anderson). She takes on the challenge of overseeing the night shift of a Manhattan arraignment court, just as he did. In her quest to bring order and dignity to the court, she enlists former night court district attorney Dan Fielding (Larroquette) to serve as the court’s public defender. Others on the team include Olivia (De Beaufort), the court’s officious and ambitious assistant district attorney; Neil (Talwalker), the court’s neurotic clerk; and Donna “Gurgs” Gurganous (Lacretta), the sharp-witted bailiff.

What do you think? Which season one episodes of the Night Court TV series do you rate as wonderful, terrible, or somewhere between? Do you think that the new Night Court should be cancelled or renewed for a second season on NBC?

Doesn’t hold a candle to the original. The success was based on incredible casting, and therefore, any remake would be destined to fail. I give it a 2 out of 10 rating. Don’t see it lasting.

Horrible….. original viewer – why did you try to mess with success? How could John walk back onto that set after key costars died? Is he that hard up for cash????

When it comes to remake an original, it always fails, sorry to say.

Thanks NBC for a New and Fantastic show ‘Night Court’! Great show! All of the characters work great together and the show is Very Funny! Looking forward to more future shows! Please Do Not Cancel this show. ~ Peace, Marc