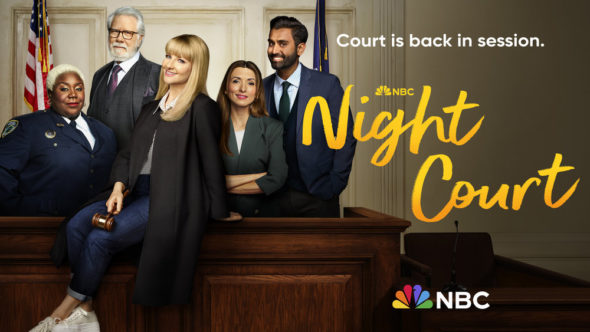 The original Night Court series performed well in the ratings for much of its nine-season run on NBC. Can this new sequel perform as well as the original? Will this version of Night Court be cancelled or renewed for season two? Stay tuned. *Status Update Below.

A workplace comedy series, the Night Court TV show stars Melissa Rauch, India de Beaufort, Kapil Talwalkar, Lacretta, and John Larroquette. The new story follows Abby Stone (Rauch), a judge following in the footsteps of her revered late father, Judge Harry Stone (Harry Anderson). She takes on the challenge of overseeing the night shift of a Manhattan arraignment court, just as he did. To bring order and dignity to the court, she enlists former night court district attorney Dan Fielding (Larroquette) to serve as the court’s public defender. Others on the team include Olivia (De Beaufort), the court’s officious and ambitious assistant district attorney; Neil (Talwalker), the court’s neurotic clerk; and Donna “Gurgs” Gurganous (Lacretta), the sharp-witted bailiff.

2/1 update: You can see the latest night’s ratings in context.

What do you think? Do you like the new Night Court TV series on NBC? Should it be cancelled or renewed for a second season?

*2/3/23 update: Night Court has been renewed for a second season by NBC.

I am hopeful this remains a hit but the buzz and the ratings decline are reminding me a lot of W&G. They had a pretty decent comeback season (quality and ratings wise), but it should’ve stayed at that without drawing it out further. Sometimes a little taste of nostalgia is better than a whole helping.

I really wanted to like this reboot. I watched four episodes and I just couldn’t enjoy it. I loved the original but think I will pass on this. I am glad for the viewers that enjoy the show. John Larroquette is an outstanding actor.

When it returned it was only slated for 1 season. It wasn’t cancelled, it was an agreement between the actors

I so wanted to love this show, but it’s…well frankly it’s exactly like it was in the old days, but without the heart or the humour. I hope it does well for John Larroquette’s and Melissa Rauch’s sakes – I always like to see that my faves are working – but I’m out.

This is such a lovely show. Can people complain about the laugh tracks,but I’ll tell you somethings a hell a lot better than what the Heck on CBS network! laugh track garbage with Chuck Lorre and his total waste of time productions

Did Chuck Lorre shoot your dog? It’s true that he doesn’t hit it out of the park every time, but he’s been making millions laugh for well over 30 years…and most comedies, including Night Court, have laugh tracks.

Oh so you think Chuck Lorre stuff is funny? Well hate to tell you this but his stuff is not as good as it used to be it’s not even close to and a half men was his best work after that it was downhill. And how he ended Two and a Half Men really pissed off a lot of people. He created a lot of enemies just because his ego made him do it. Frankly speaking his current stuff on CBS network is terrible but because of the pandemic people have a tendency to watch any piece of garbage… Read more »