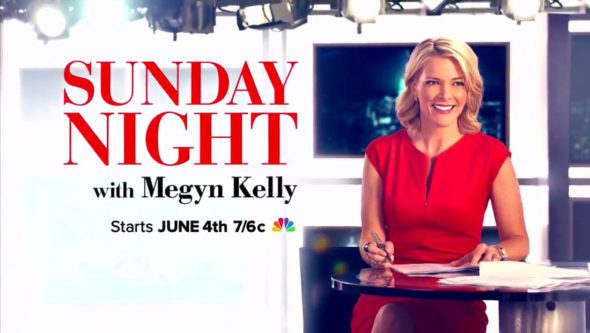 For decades, 60 Minutes on CBS has been the reigning Sunday evening news magazine show. Now NBC, which has had its own success with Dateline on Fridays, is attempting to make a big splash on Sunday nights this summer, with its celebrated new hire. Can the Peacock use Sunday Night with Megyn Kelly to capture some of the Tiffany Network audience? Cancelled or renewed for season two? Stay tuned.

A news magazine show, Sunday Night with Megyn Kelly features the former Fox News personality, covering what NBC calls, “The stories of our time.” Kelly will also host a still untitled NBC morning show, set to begin in the fall of 2017. The first season of Sunday Night with Megyn Kelly is a limited summertime run. The new TV series is set to return, after football and the Winter Olympics, in 2018.

6/5 update: You can see the rest of the latest night’s ratings.

What do you think? Do you like the Sunday Night with Megan Kelly TV show Should it be cancelled or renewed for a second season?


3/6/18 update: NBC has renewed this show for a second season. Details here.

We need a positive influence and not a “woman” host that continually under minds and defames the “negative” aspects to excite viewers. Where is “her” morals and virtues and since when is “she” the authority on righteousness?
Certainly not a role model for any youth!!!!!! Show and anything associated with “her” should be cancelled!!!!!!!

The show should be cancelled! The network betrayed Tamrin Hall for her??? A waste of my viewing time.

I don’t care for her at all!! I haven’t watched her ever except for presidential debate! Something is wrong with NBC !!! Stay true to yourselves it’s not Megyn Kelly! I watch MSNBC sometimes today show .

She should be canceled, worst demo on NBC

I like the show! Nothing wrong with it. Informative and insightful observations.

The show should be cancelled.

You’re losing all your viewers, Tarly.

Take her off the air permanently.

She belongs on MSNBC, not NBC. Putting her on NBC was a mistake.

I could never watch this vomit.

Wish I could get back that hour. This “show” is a total nothing burger. Anyone could have had a an intriguing interview with Vladimir, but Megyn had an epic fail. She should go back to drawing attention to her great big self by writing books The advertisers won’t pour their $$$ into this dead air space for long.