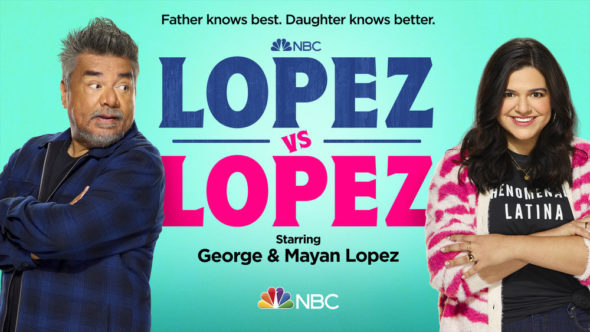 George Lopez has a long history with television comedy series. The George Lopez Show was a big success on ABC, but later sitcoms like Saint George and Lopez had much shorter lifespans. Now, he’s back with a new show on NBC and is joined by his real-life daughter. Will Lopez vs. Lopez be cancelled or renewed for season two? Stay tuned.

A family comedy series, the Lopez vs. Lopez TV show stars George Lopez, Mayan Lopez, Selenis Leyva, Brice Gonzalez, and Matt Shively, with Laci Mosley and Kiran Deol in recurring roles. The story revolves around a generational conflict between a partially estranged father and daughter — working-class, old-school George (George Lopez) and his Gen Z daughter, Maya (Mayan Lopez). George was largely an absent father and he also cheated on Maya’s mother (Leyva) and gambled a lot. Now, Maya has been through years of therapy and George has gone through a tough time. Now, that he’s moved in with Maya and her family, the two might have a chance at repairing their relationship. Along with his stoner pal Oscar (Madrigal), George is renovating Maya’s kitchen and enjoys tormenting her husband Quinten (Shively) along the way. George is also getting to connect with his young grandson, Chance (Gonzalez).

What do you think? Do you like the Lopez vs. Lopez TV series on NBC? Should it be cancelled or renewed for a second season?

I actually liked this, even though there is some room for improvement to be sure and that’s mainly with the writing. In a way, it’s almost like George Lopez is playing Benny from The George Lopez Show in this. That’s not an issue, but just saying. I will say though that the whole older generation versus new generation tropes are kind of tired though.

Lopez vs Lopez should be renewed.