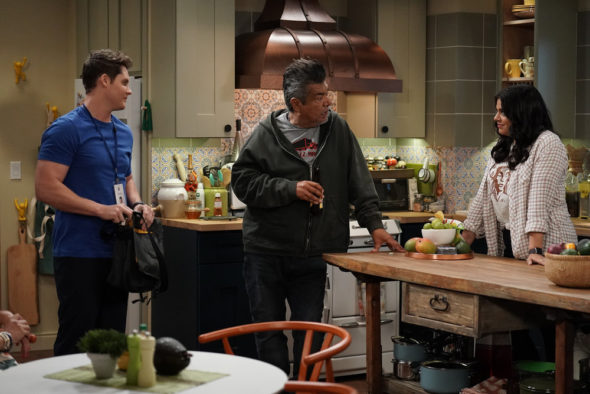 It’s a battle of the generations for laughs. Will the audience be the winner? Has the Lopez vs. Lopez TV show been cancelled or renewed for a second season on NBC? The television vulture is watching all the latest cancellation and renewal news, so this page is the place to track the status of Lopez vs. Lopez, season two. Bookmark it, or subscribe for the latest updates. Remember, the television vulture is watching your shows. Are you?

A family comedy series airing on the NBC television network, the Lopez vs. Lopez TV show stars George Lopez, Mayan Lopez, Selenis Leyva, Brice Gonzalez, and Matt Shively, with Laci Mosley and Kiran Deol in recurring roles. The story revolves around a generational conflict between a partially estranged father and daughter — working-class, old-school George (George Lopez) and his Gen Z daughter, Maya (Mayan Lopez). George was largely an absent father, and he also cheated on Maya’s mother (Leyva) and gambled a lot. Now, Maya has been through years of therapy, and George has gone through a tough time. Now that he’s moved in with Maya and her family, the two might have a chance at repairing their relationship. Along with his stoner pal Oscar (Madrigal), George is renovating Maya’s kitchen and enjoys tormenting her husband Quinten (Shively) along the way. George is also getting to connect with his young grandson, Chance (Gonzalez).

The first season of Lopez vs. Lopez averages a 0.29 rating in the 18-49 demographic and 2.27 million viewers in the live+same day ratings (including DVR playback through 3:00 AM). While these numbers don’t include further delayed or streaming viewing, they are a very good indicator of how a show is performing, especially when compared to others on the same channel. There can be other economic factors involved in a show’s fate, but typically the higher-rated series are renewed and the lower-rated ones are cancelled. Find out how Lopez vs. Lopez stacks up against other NBC TV shows.

Will NBC cancel or renew Lopez vs. Lopez for season two? The ratings are low, as one would expect with a Friday night series. The peacock network has very few comedy series, so I think this new show has a good chance of being renewed. I’ll update this page with breaking developments. Subscribe for free alerts on Lopez vs. Lopez cancellation or renewal news.

What do you think? Do you hope the Lopez vs. Lopez TV show will be renewed for a second season? How would you feel if NBC cancelled this TV series, instead?

I loved the show! I think it should be renewed.

It’s not on the level of “George Lopez” but it’s okay so far. I can understand why some people wouldn’t like it though. The writing needs to be a lot better. And I really hope they don’t overuse the Tik-Tok gimmick. They used it well as a tiny plot device in the pilot but I don’t want to keep seeing it throughout the show.

I think the show was stupid

Lopez vs Lopez should be renewed.