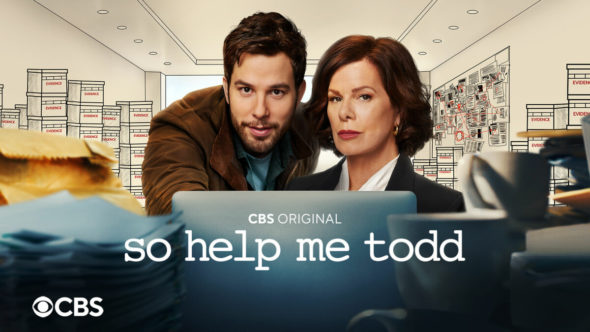 CBS has been filling its schedule with procedurals and spin-offs of procedurals for years. This time around, the network is trying something a little different — a legal drama. Will it be a success in the ratings? Will So Help Me Todd be cancelled or renewed for season two? Stay tuned.

The So Help Me Todd TV show stars Marcia Gay Harden, Skylar Astin, Madeline Wise, Tristen J. Winger, Inga Schlingmann, and Rosa Arredondo. In the story, Margaret Wright (Harden) is a razor-sharp and successful attorney who is reeling from the recent dissolution of her marriage. Her son Todd (Astin) is a quick-thinking former private detective who’s fallen on hard times after his “flexible interpretation of the law” got his license revoked. Though Margaret’s high standards and strict adherence to the law are at complete odds with Todd’s scrappy and seat-of-his-pants methods, she asks him to join her firm as the in-house investigator. Mother and son working together is a big first step toward mending their fragile and dysfunctional relationship. They may even come away with a better understanding of each other at this pivotal point in their lives.

What do you think? Do you like the So Help Me Todd TV series on CBS? Should it be cancelled or renewed for a second season?

I absolutely love this show and try so hard to stay up so I can watch, but I like a million other people trying to make it these days, just can’t I have to get up at 6 for my job :(. Please renew this show and change the time to earlier maybe?

I really hope this show gets a second season. It’s hysterical, with such smart writing. This is a great cast. Skylar Astin and Marcia Gay Harden are the perfect team as mother and son. The rest of the cast is great, too. What a breath of fresh air.

I love this show! My wife and I have not missed one episode watching this show together. Sometimes we record it and watch it later, but we just love it! We love the drama and comic relief being cleverly intertwined. Marcia Harden and Skyler Austin have a wonderful chemistry together as mother and son, and as being extremely familiar with both attorneys and investigators working together, what they do and their relationship as co-workers and mother and son is accurate and believable. This show has a very heartwarming relationship between a successful working mother and her children, as well as… Read more »

Love this show. Please do not replace it with pickled. Will never watch Steven Colbert. Finally a decent and funny show to watch and it might be cancelled!

Show has potential of being another “Suits”, but only on a high school performance level. Unfortunately Astin overplays his character to the point of resembling a hyper squirrel running about law offices and city streets, and amazingly no other “normal” character seems to notice. They need to tone him down several notches before audiences tire of his angst.

Suits was horrible, so I’m glad this show is not another Suits. It should not be aspiring to be THAT SHOW. Lol

I love this show, very funny . Please renew this show.

Love this show, it is witty and entertaining. The actors work so well together. Finally something that’s entertaining on regular tv!

I’m enjoying this show immensely. It’s the law firm/detective show equivalent of a big bowl of mac and cheese.

Show is really good! Very shocking so there is some hope for network TV.

I thought that it had a good premise and Skylar Austin is a good reason to watch it.