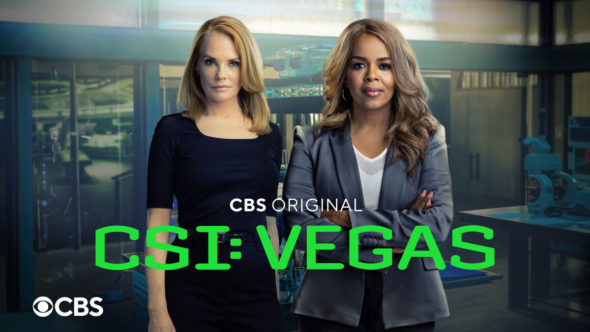 The first season of CSI: Vegas drew low overnight ratings (it was CBS’ lowest-rated scripted series to be renewed) but doubled its viewership when you add in the live+7 day ratings. Could the numbers improve this time around? Will CSI: Vegas be cancelled or renewed for season three? Stay tuned.

For comparisons: Season one of CSI: Vegas on CBS averaged a 0.40 rating in the 18-49 demographic and 3.70 million viewers in the live+same day ratings.

What do you think? Do you like the CSI: Vegas TV series on CBS? Should it be cancelled or renewed for a third season?

Please renewed season 3 so good. Look forward to seeing it. Every Thursday enjoy it and love it. Never missed any episodes of it.

Love this show so good

Enjoying season two back to it’s old format and style including original theme music and Marg H . Season one was a bummer trying to feature gill Grissom and his gf.

Look forward to seeing it csi classic icon so good drama . Enjoy it and love it all episodes of it. Never missed any episode of it since been revival of it.