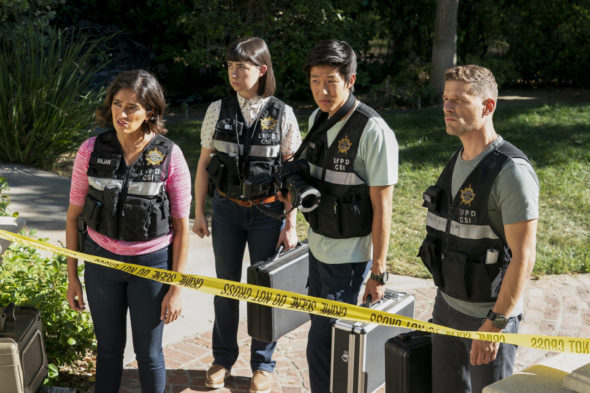 Marg Helgenberger is the latest CSI veteran to return. Could an actor from CSI: NY or CSI: Miami be next? Has the CSI: Vegas TV show been cancelled or renewed for a third season on CBS? The television vulture is watching all the latest cancellation and renewal news, so this page is the place to track the status of CSI: Vegas, season three. Bookmark it, or subscribe for the latest updates. Remember, the television vulture is watching your shows. Are you?

The second season of CSI: Vegas averages a 0.29 rating in the 18-49 demographic and 3.35 million viewers in the live+same day ratings (includes all DVR playback through 3:00 AM). Compared to season one, that’s down by 28% in the demo and down by 9% in viewership. While these numbers don’t include further delayed or streaming viewing, they are a very good indicator of how a show is performing, especially when compared to others on the same channel. Though other economic factors are involved, the higher-rated shows usually get renewed and the lower-rated ones get cancelled. Find out how CSI: Vegas stacks up against other CBS TV shows.

Will CBS cancel or renew CSI: Vegas for season three? Last season, CSI: Vegas was the network’s lowest-rated scripted series in the traditional ratings to be renewed. However, the season nearly doubled its viewership when the live+seven day numbers were factored in. I suspect that, given the popularity of the CSI franchise in first-run and syndication, CBS was expecting the show to be a bigger hit. I think the execs have the big picture in mind and will keep this show going, despite mediocre ratings, because a new series is a way to add new content and interest to an already profitable franchise.  I’ll update this page with breaking developments. Subscribe for free alerts on CSI: Vegas cancellation or renewal news.

What do you think? Do you hope that the CSI: Vegas TV show will be renewed for a third season? How would you feel if CBS cancelled this TV series, instead?

Love the show cos Vegas I faithfully watch it Every week along with taping the episodes.i hope there are others that support this show,for I do not want to see it cancelled.

The Reason I think it’s failing because of time slot. Now it’s harder to watch because people are going to bed earlier 10:00 PM on a week day and no access to dvr’s. My Wife and I are true fans, now we keep missing the shows. Sorry CBS, try moving it to an earlier time slot and it might take off again.

Please don’t cancel. It’s in’s of the best shows on TV at this time.

Love this show great cast bring back . Jerry Brockhelmer is the best producer and creative since original series too,

I am above that demographic as I am sure many are of the original show so, please get real people.
It’s a great show and if it is cancelled, shame on you CBS for listening to the culturally dead.