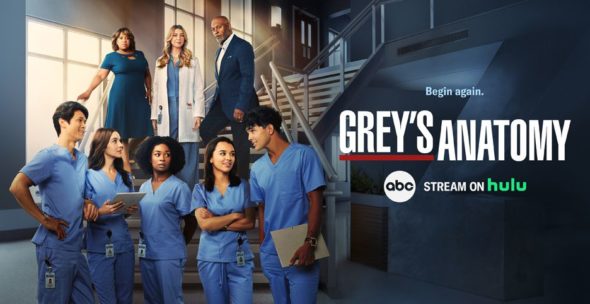 Though Grey’s Anatomy has been around since 2005, the show’s remained one of ABC’s top-rated shows. This season, star Ellen Pompeo is reducing her on-screen time, and a group of new residents has been introduced to give the series a bit of a refresh. Will these changes positively or negatively affect viewer interest? Could Grey’s Anatomy be cancelled, or is it essentially guaranteed to be renewed for a 20th anniversary season and beyond? Stay tuned.

A medical drama series, the Grey’s Anatomy TV show stars Pompeo, Chandra Wilson, James Pickens Jr., Kevin McKidd, Caterina Scorsone, Camilla Luddington, Kelly McCreary, Kim Raver, Jake Borelli, Chris Carmack, Anthony Hill, Alexis Floyd, Niko Terho, Midori Francis, Harry Shum Jr., and Adelaide Kane. Recurring players include Jaicy Elliot, Scott Speedman, Kate Walsh, and Debbie Allen. The long-running series revolves around the personal and professional lives of the surgical residents, fellows, and attendings in the surgical wing of the fictional Grey-Sloan Memorial Hospital in Seattle, Washington. They seek comfort from one another, and, at times, more than just friendship. Together they discover that neither medicine nor relationships can be defined in black and white. Season 19 sees a new crop of residents joining the staff as the residency program is reinstated.

What do you think? Do you like the Grey’s Anatomy TV series on ABC? Should it be cancelled or renewed for a 20th anniversary season?

Cancel it. Worst season ever. I would rather watch you tube videos on sanding door jams.

I think the network can survive without both this and Station 19. Other shows are clearly ready to take over.