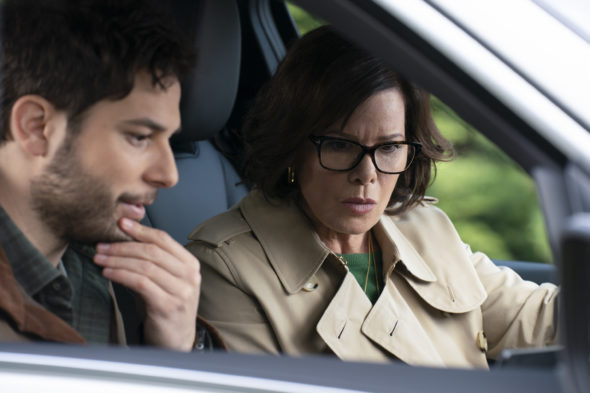 TV show description:
A legal drama series, the So Help Me Todd TV show was created by Scott Prendergast, based on some experiences from his own life.

In the story, Margaret Wright (Harden) is a razor-sharp and successful attorney who is reeling from the recent dissolution of her marriage. Her son Todd (Astin) is the black sheep of the family. He’s a laidback and quick-thinking former private detective who’s fallen on hard times after his “flexible interpretation of the law” got his license revoked.

When Todd inadvertently teams with his mother on a case and uses his wide-ranging tech abilities and charm. Margaret’s surprised to find herself both impressed by and proud of his crafty ability to sleuth out information.

Though Margaret’s high standards and strict adherence to the law are at complete odds with Todd’s scrappy and seat-of-his-pants methods, she asks him to join her firm as the in-house investigator. Todd takes the job since it means getting his license back and once again doing the job he excels at and loves.  He works with Lyle (Winger), a high-maintenance and by-the-book licensed investigator.

Francey (Arredondo) is Margaret’s efficient assistant at the firm. She can make anything happen in any amount of time and tends to Margaret and Todd in equal measure. She and Margaret have a secret that has bound them together for years.

Mother and son working together is a big first step toward mending their fragile and dysfunctional relationship. They may even come away with a better understanding of each other at this pivotal point in their lives.

What do you think? Do you like the So Help Me Todd TV show? Do you think it should be cancelled or renewed for another season?