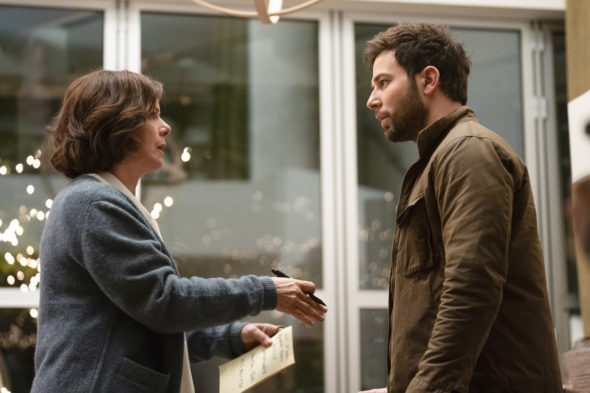 Mother and son may end up healing their relationship in the first season of the So Help Me Todd TV show on CBS. As we all know, Nielsen ratings typically play a big role in determining whether a TV show like So Help Me Todd is cancelled or renewed for season two. Unfortunately, most of us do not live in Nielsen households. Because many viewers feel frustrated when their viewing habits and opinions aren’t considered, we invite you to rate all of the first season episodes of So Help Me Todd here.

A CBS legal drama series, the So Help Me Todd TV show stars Marcia Gay Harden, Skylar Astin, Madeline Wise, Tristen J. Winger, Inga Schlingmann, and Rosa Arredondo. In the story, Margaret Wright (Harden) is a razor-sharp and successful attorney who is reeling from the recent dissolution of her marriage. Her son Todd (Astin) is a quick-thinking former private detective who’s fallen on hard times after his “flexible interpretation of the law” got his license revoked. Though Margaret’s high standards and strict adherence to the law are at complete odds with Todd’s scrappy and seat-of-his-pants methods, she asks him to join her firm as the in-house investigator. Mother and son working together is a big first step toward mending their fragile and dysfunctional relationship. They may even come away with a better understanding of each other at this pivotal point in their lives.

I really like So Help Me Todd. Please don’t cancel the show.