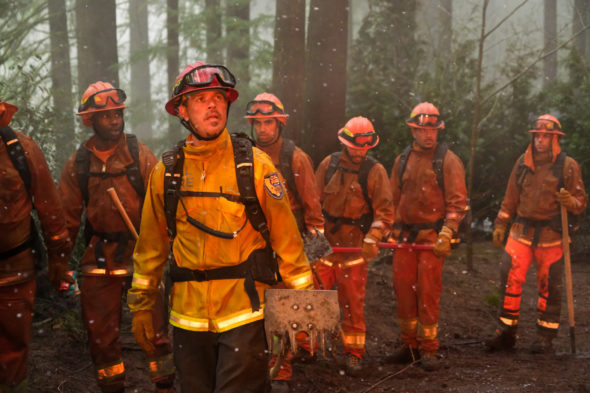 Bode is feeling the heat. Has the Fire Country TV show been cancelled or renewed for a second season on CBS? The television vulture is watching all the latest cancellation and renewal news, so this page is the place to track the status of Fire Country, season two. Bookmark it, or subscribe for the latest updates. Remember, the television vulture is watching your shows. Are you?

A drama series airing on the CBS television network, the Fire Country TV show stars Max Thieriot, Billy Burke, Kevin Alejandro, Diane Farr, Stephanie Arcila, Jordan Calloway, and Jules Latimer. In the story, Bode Donovan (Thieriot) is a young convict seeking redemption and a shortened prison sentence. He joins a prison release firefighting program in Northern California, and it’s a high-risk, high-reward assignment. Bode is unwittingly assigned to Three Rock Con Camp, which is located in his small hometown of Edgewater. That’s where he was once a golden all-American son and also where his troubles began. Five years ago, Bode burned down everything in his life and left town with a big secret. Now he’s back, with the rap sheet of a criminal and hoping for a chance at redemption.

The first season of Fire Country averages a 0.44 rating in the 18-49 demographic and 5.55 million viewers in the live+same day ratings (including DVR playback through 3:00 AM). While these numbers don’t include further delayed or streaming viewing, they are a very good indicator of how a show is performing, especially when compared to others on the same channel. There can be other economic factors involved in a show’s fate, but typically the higher-rated series are renewed and the lower-rated ones are cancelled. Find out how Fire Country stacks up against other CBS TV shows.

Will CBS cancel or renew Fire Country for season two? The network has plenty of procedural dramas, but unlike ABC and NBC, doesn’t have any firefighter ones. I think this show fits well with CBS’ other Friday night programs, and it’s produced in-house (so the company sees multiple profit sources). So, I think Fire Country has a good chance of being renewed. I’ll update this page with breaking developments. Subscribe for free alerts on Fire Country cancellation or renewal news.

What do you think? Do you hope that the Fire Country TV show will be renewed for a second season? How would you feel if CBS cancelled this TV series, instead?

Sorry but your article is incorrect. Fire Country and two other new CBS dramas were given full first season orders. The article links to a CBS press release from 10/19 but misrepresents what it says. https://www.paramountpressexpress.com/cbs-entertainment/releases/?view=101107-cbs-orders-full-season-pickups-for-this-years-top-three-new-series-fire-country-east-new-york-and-so-help-me-todd

I thought the Fire Country was a great show that I’ve seen so far. It was thrilling and captive I couldn’t stop watching. My eyes were glued to the show until the end. I feel for Bode and want to see more on where he ends up after he completes his time at the fire camp. Bode is rebellious in ways up its always for the good he is proving that he is more of a help then being the person he was before going to prison. I really do hope they continue the show.It would be nice to see… Read more »