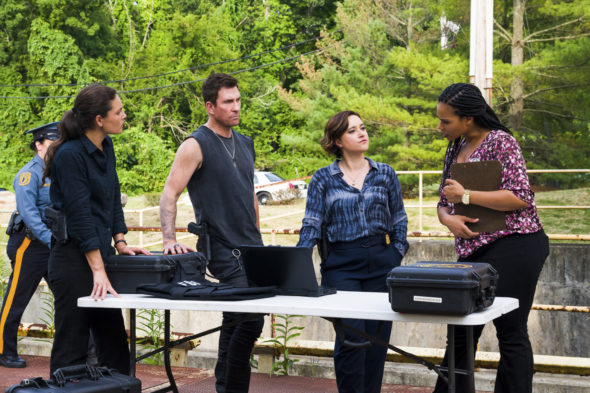 This crew is always chasing somebody. Has the FBI: Most Wanted TV show been cancelled or renewed for a fifth season on CBS? The television vulture is watching all the latest cancellation and renewal news, so this page is the place to track the status of FBI: Most Wanted, season five. Bookmark it, or subscribe for the latest updates. Remember, the television vulture is watching your shows. Are you?

Airing on the CBS television network, FBI: Most Wanted is a spin-off of the FBI TV series. The show stars Dylan McDermott, Alexa Davalos, Roxy Sternberg, Keisha Castle-Hughes, and Edwin Hodge. Rebecca Brooksher and Catherine Wolf recur. The story focuses on the work of the Fugitive Task Force, a team that tracks and captures notorious criminals on the Federal Bureau of Investigation’s Most Wanted list. The team’s charming but formidable leader is Supervisory Special Agent Remy Scott (McDermott). He started his career in the New York FBI field office before rising through the ranks of the Bureau in Philadelphia and Las Vegas. The team includes Special Agent Sheryll Barnes (Sternberg), a former NYPD detective and forensics expert who is raising two young children with her wife; Special Agent Hana Gibson (Castle-Hughes), a gifted millennial computer whiz with a sharp wit and mad hacking skills; Special Agent Kristin Gaines (Davalos), a Navy veteran who has earned a reputation for not giving up on cold cases; and their newest member, former New Orleans cop-turned-junior detective Ray Cannon (Hodge). He worked in Violent Crimes in Albany after following in his retired FBI agent father’s footsteps and graduating at the top of his class at Quantico last year.

The fourth season of FBI: Most Wanted averages a 0.49 rating in the 18-49 demographic and 5.33 million viewers in the live+same day ratings (including DVR playback through 3:00 AM). Compared to season three, that’s down by 6% in the demo and down by 5% in viewership. While these numbers don’t include further delayed or streaming viewing, they are a very good indicator of how a show is performing, especially when compared to others on the same channel. There can be other economic factors involved in a show’s fate, but typically the higher-rated series are renewed and the lower-rated ones are cancelled. Find out how FBI: Most Wanted stacks up against other CBS TV shows.

There’s no need to wonder if CBS will cancel FBI: Most Wanted in the immediate future since it’s already been renewed for season five. I’ll update this page with breaking developments. Subscribe for free alerts on FBI: Most Wanted cancellation or renewal news.

What do you think? Are you glad that the FBI: Most Wanted TV show has been renewed for a fifth season? How would you feel if CBS had cancelled this TV series, instead?