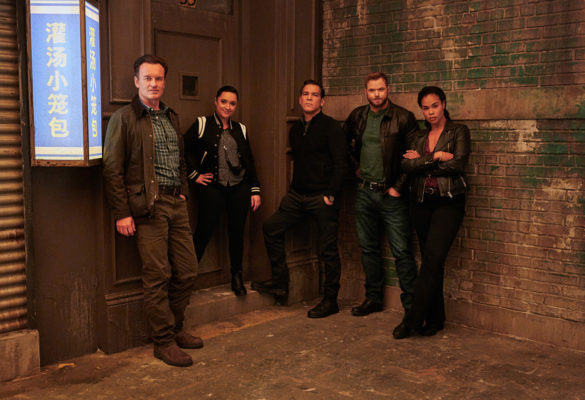 LaCroix and his team will stay on the trail of criminals in the 2021-22 television season. CBS has renewed the FBI: Most Wanted TV show for a third season.

Airing on Tuesday nights, FBI: Most Wanted is a spin-off of the FBI TV series. The show stars Julian McMahon, Kellan Lutz, Roxy Sternberg, Keisha Castle-Hughes, and Nathaniel Arcand with Lorne Cardinal, Irene Bedard, and Terry O’Quinn in recurring roles. The story focuses on the work of the Fugitive Task Force, a team that tracks and captures the notorious criminals on the Federal Bureau of Investigation’s Most Wanted list. The highly skilled agents function as a mobile undercover unit that’s always out in the field, pursuing those who are most desperate to elude justice. Jess LaCroix (McMahon), a seasoned but enigmatic agent, oversees the team which includes former NYPD detective Sheryll Barnes (Sternberg); data analyst Hana Gibson (Castle-Hughes); Army intel veteran Kenny Crosby (Lutz); and deadly marksman Clinton Skye (Arcand).

The second season of FBI: Most Wanted averages a 0.59 rating in the 18-49 demographic and 5.75 million viewers. Compared to season one, that’s down by 21% in the demo and down by 18% in viewership. Nine episodes have aired so far this season.

Today, CBS also renewed FBI for a fourth season and ordered another spin-off, FBI: International.  All three TV shows will be part of the network’s 2021-22 season schedule and the new FBI: International series will launch as part of a three-series crossover.

What do you think? Do you enjoy procedural TV series? Will you be tuning in for the third season of the FBI: Most Wanted TV show on CBS?

Love the show. Hope it will not be canceled. When you start enjoying shops the powers to be will start canceling. Hope this doesn’t happen here.

I would like more prominence from Terry O’Quin. The wedding, and that little by little it was clarifying why he was in jail, etc …

Love this show! So glad it will be picked up for season 3! Would like to see it lasting for lots of seasons!

I love the show, not to many tv shows out there any more worth watching,, but this one I really do In joy