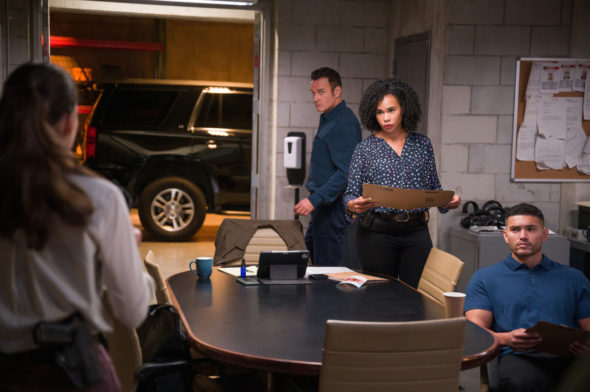 How many fugitives will be brought to justice in the third season of the FBI: Most Wanted TV show on CBS? As we all know, the Nielsen ratings typically play a big role in determining whether a series like FBI: Most Wanted is cancelled or renewed for season four. Unfortunately, most of us do not live in Nielsen households. Because many viewers feel frustrated when their viewing habits and opinions aren’t considered, we invite you to rate all of the third season episodes of FBI: Most Wanted here. Status Update Below.

A CBS procedural drama, FBI: Most Wanted is a spin-off of the FBI TV series. The show stars Julian McMahon, Alexa Davalos, Roxy Sternberg, Keisha Castle-Hughes, Miguel Gomez, and Dylan McDermott. The story focuses on the work of the Fugitive Task Force, a team that tracks and captures the notorious criminals on the Federal Bureau of Investigation’s Most Wanted list. The highly skilled agents function as a mobile undercover unit that’s always out in the field, pursuing those who are most desperate to elude justice. Jess LaCroix (McMahon), a seasoned but enigmatic agent, oversees the team which includes forensics expert Sheryll Barnes (Sternberg); computer and hacking whiz Hana Gibson (Castle-Hughes); undercover pro Ivan Ortiz (Gomez); and Navy veteran and cold-case expert Kristin Gaines (Davalos).

What do you think? Which season three episodes of the FBI: Most Wanted TV series do you rate as wonderful, terrible, or somewhere between? Do you think that FBI: Most Wanted should be cancelled or renewed for a fourth season on CBS? Don’t forget to vote, and share your thoughts, below.

Dylan McDermott is a good addition to the cast. Hopefully the show won’t be quite so dark all the time now.

Love this show and very sad to see the main star Julian McMahon leaving. Wondering what happens to his daughter and does his father now come in as a new main character? It will be interesting to see how they move the show forward without Julian. Please keep the show and do not cancel it. Peace, Marc

Love this show. Miss Jess’s father in law, Nathaniel and Kellan he was a great team member. Love love love Julian and Keisha. Do not cancel this show!

I loved this show until they added Alexa Davalos. Now I can barely stand watching it. They got rid of 3 team members that were awesome and brought in this boring character with an annoying voice. It’s awful.

At first I wasn’t for sure if I was going to like it, but now, it’s one of my favorite programs. I love the actors in it. So I really hope you keep it for more upcoming Seasons!

I enjoy the other two FBI shows but the content of this one is horrible and opportunistically used. Not entertaining—sick.

We love FBI Most Wanted. Just wish they wouldn’t have changed it to 10 pm. 9 pm worked better for us. I have to DVR it now because I go to bed early to get up early for work.

Alexa Davalos is perfect! Such an overly dramatic actress. I can wait for next week and new main characters male coming soon.

Alexa Davalos is awful!! Such an overly dramatic actress. Whenever she speaks it is annoying to watch. PLEASE remove her and soon!!

Totally agree!!! I wish she would be removed as well.

I agree!!!! I want to turn it off when I hear her voice. That character is a huge fail.

I agree. Her voice is so dramatic. She looks like she’s always depressed. She does not match the rest of the cast. Please put in someone more lively.

Great first love it cannot wait for next week