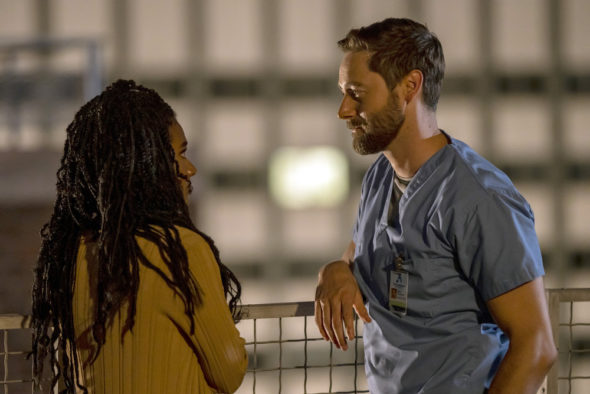 Is the fourth season of NBC’s New Amsterdam TV show truly a new chapter for the characters? As we all know, the Nielsen ratings typically play a big role in determining whether a TV show like New Amsterdam is cancelled or renewed for season five. Unfortunately, most of us do not live in Nielsen households. Because many viewers feel frustrated when their viewing habits and opinions aren’t considered, we invite you to rate all of the fourth season episodes of New Amsterdam here.

An NBC medical drama, the New Amsterdam TV show stars Ryan Eggold, Janet Montgomery, Freema Agyeman, Jocko Sims, and Tyler Labine, with Michelle Forbes, Sandra Mae Frank, Shiva Kalaiselvan, and Chloe Freeman recurring. Doctor Max Goodwin (Eggold) is a caring physician whose goal is to fix a broken medical system and to provide exceptional care to the people who need it most. He inspires (almost) everyone around him, and will stop at nothing to breathe new life into the understaffed, underfunded, and underappreciated New Amsterdam Medical Center. Those working with Goodwin include Dr. Lauren Bloom (Montgomery), the head of the ER; oncologist Dr. Helen Sharpe (Agyeman); cardiovascular surgeon Dr. Floyd Reynolds (Sims); and psychiatrist Dr. Iggy Frome (Labine). In season four, following a tough year, it’s a new chapter in the characters’ lives, focused on finding more joy. That may not be easy with the addition of Dr. Veronica Fuentes (Forbes) to the team. In an effort to help turn around the overburdened and underfunded hospital, her first order of business is to tear down every progressive program Max has erected.

What do you think? Which season four episodes of the New Amsterdam TV series do you rate as wonderful, terrible, or somewhere between? Are you glad that New Amsterdam has been renewed for a fifth season on NBC? Don’t forget to vote, and share your thoughts, below.

The show really has run its course but I hope the writers will try to create some new and very different storylines for the remainder of the series. For instance, Helen’s stroke or medical issue is requires her character to go in a new and challenging direction, not only personally but professionally as well. Look forward to some good writing and acting to take us to the end kf the series.

New Amsterdam is one of the most well put together medical show ever. The cast is amazing everyone I know looks forward to TUES NIGHT AGAIN FOR NEW AMSTERDAM I think NBC did a great disservice by canceling them it was due to the scheduling they would be on next interruption for the Olympics anything and not a bit of promotion for this show fans cannot get enough of this show please reconsider and reinstate them

I enjoy all the cast members on NEW AM. The storylines are often different and intriguing.
This show has had me laugh out loud or get teary-eyed. I adore Sharpwin (Helen and Max).
The move to London offers new possibilities for viewers. It is very rare to see a Black woman
loved by the lead white actor. On many shows the Black woman dies or her lover dies.
Something tragic is common.

We all know that Max and Helen will only be in London probably till the end of season 4. Would like to have less emphasis on Sharpwin while they’re gone, but I think the writers realize that Helen and her BF Max are the reason why a large percentage of the audience tunes in. Freema has a huge following.

This season has been awful!! I hope it’s the last. Story lines are foolish and silly. PLEASE let it die quickly and quietly!

This show is so great. All of the characters are wonderful. I hope it stays on many more years and gets higher ratings.