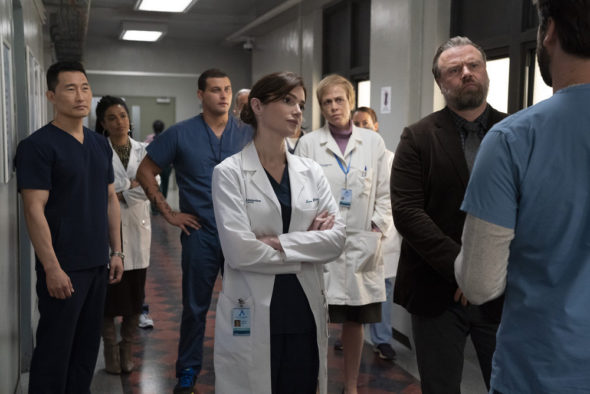 Can Max make meaningful change in the third season of the New Amsterdam TV show on NBC? As we all know, the Nielsen ratings typically play a big role in determining whether a TV show like New Amsterdam is cancelled or renewed for season four. Unfortunately, most of us do not live in Nielsen households. Because many viewers feel frustrated when their viewing habits and opinions aren’t considered, we invite you to rate all of the third season episodes of New Amsterdam here.

An NBC medical drama series, the New Amsterdam TV show stars Ryan Eggold, Freema Agyeman, Janet Montgomery, Jocko Sims, Anupam Kher, and Tyler Labine. Doctor Max Goodwin (Eggold) is a caring physician whose goal is to fix a broken medical system and to provide exceptional care to the people who need it most. He inspires (almost) everyone around him, and will stop at nothing to breathe new life into the understaffed, underfunded, and underappreciated New Amsterdam Medical Center. Those working with Goodwin include Dr. Lauren Bloom (Montgomery), the head of the ER; oncologist Dr. Helen Sharpe (Agyeman); cardiovascular surgeon Dr. Floyd Reynolds (Sims); psychiatrist Dr. Iggy Frome (Labine); and Dr. Vijay Kapoor (Kher), head of the Neurological Department. In season three, Max and his team face the daunting task of sustaining that optimism while dealing with a pandemic that exposed the gaping inequities in our health care. Max is no longer content to fix a broken system. He’s determined to tear it down and build something better.

What do you think? Which season three episodes of the New Amsterdam TV series do you rate as wonderful, terrible, or somewhere between? Are you glad that New Amsterdam has been renewed for a fourth season on NBC? Don’t forget to vote, and share your thoughts, below.

New Amsterdam used to be my favourite show but it’s become so woke I will no longer watch and be lectured. Last episode should have been used to show the effects of the vaccine like stroke, blood clots etc. Instead of blaming other people.

I love watching Heartland. Im upset netflix hasn’t let us watch season 14 yet. I got to watch 5 episodes of season 14 on my friends tv cant wait to see the rest and season 15 wish ty was still on the show but the rest of the cast is still there. Hope we have alot more to come its truly one of my favorite shows deals with real life situations.