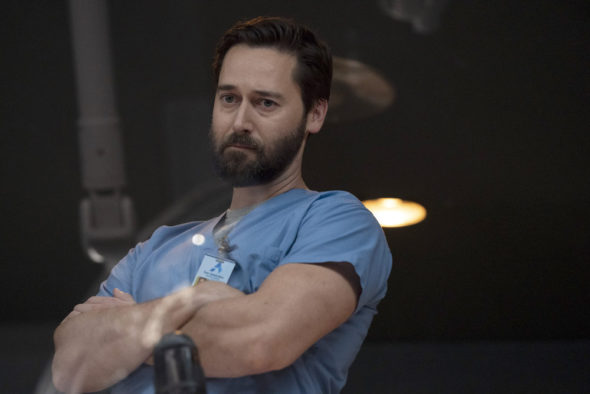 Can the medical center handle a pandemic? Has the New Amsterdam TV show been cancelled or renewed for a fourth season on NBC? The television vulture is watching all the latest cancellation and renewal news, so this page is the place to track the status of New Amsterdam, season four. Bookmark it, or subscribe for the latest updates. Remember, the television vulture is watching your shows. Are you?

Airing on the NBC television network, the New Amsterdam TV show stars Ryan Eggold, Freema Agyeman, Janet Montgomery, Jocko Sims, Anupam Kher, and Tyler Labine. Doctor Max Goodwin (Eggold) is a caring physician whose goal is to fix a broken medical system and to provide exceptional care to the people who need it most. He inspires (almost) everyone around him, and will stop at nothing to breathe new life into the understaffed, underfunded, and underappreciated New Amsterdam Medical Center. Those working with Goodwin include Dr. Lauren Bloom (Montgomery), the head of the ER; oncologist Dr. Helen Sharpe (Agyeman); cardiovascular surgeon Dr. Floyd Reynolds (Sims); psychiatrist Dr. Iggy Frome (Labine); and Dr. Vijay Kapoor (Kher), head of the Neurological Department. In season three, Max and his team face the daunting task of sustaining that optimism while dealing with a pandemic that exposed the gaping inequities in our health care. Max is no longer content to fix a broken system. He’s determined to tear it down and build something better.

The third season of New Amsterdam averaged a 0.46 rating in the 18-49 demographic and 3.62 million viewers. Compared to season two, that’s down by 40% in the demo and down by 29% in viewership. Find out how New Amsterdam stacks up against other NBC TV shows.

There’s no need to worry that NBC will cancel New Amsterdam anytime soon since it’s already been renewed for a fourth and a fifth season. I’ll update this page with breaking developments. Subscribe for free alerts on New Amsterdam cancellation or renewal news.

What do you think? Are you glad that the New Amsterdam TV show has been renewed for a fourth season? How would you feel if NBC had cancelled this TV series, instead?

I loved Georgia on the show. I wish they find someone like her for max. They act like Helen is the best doctor ever

I love this showIt has such interesting people on it. It is always exciting

Super excited about this renewal.
I looooove this series!!!!!

Buy how did the directors allow Georgia’s death????

Looking forward to your bringing a new lady friend for Max…someone similar to Georgia.

Love the show. This is the only show I watch on NBC.