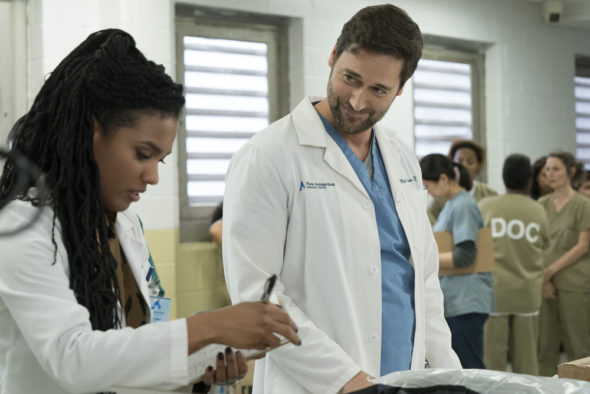 New Amsterdam will not return with new episodes until next month, but fans of the series are being given a little something to help tide them over to its return. A new digital series popped up on the NBC app on Tuesday that shows the origin story of Dr. Max Goodwin. Viewers will find out how his catch phrase came to be.

Ryan Eggold stars in this NBC series. The network revealed more about the new digital series in a press release.

“NBC delivers the holiday treat New Amsterdam: Day 1, a six-episode digital series capturing Dr. Max Goodwin’s first day on the job and the origins story of his mantra, “How can I help?”

Meet the other doctors and staff through these short vignettes and uncover the hopes and struggles of our soon-to-be Dam Fam while also getting a front row seat on how a life can change in a split second and when least expected. New Amsterdam: Day 1 takes place the morning of the first season pilot episode and is available now exclusively on the NBC App.

New Amsterdam returns Tuesday, Jan. 14 at 10 p.m. ET/PT with all new episodes. Stream the series from the beginning on the NBC App.

In the wake of the ambulance crash that ended season one of New Amsterdam, medical director Dr. Max Goodwin must grieve the death of someone close to him while continuing his commitment to solve systemic health care issues at the hospital. Add his new responsibilities as a father and his cancer still lingering in the rear-view mirror, everyone around Max has to wonder how long he can sustain this impossible load. But, “How can I help?” is not just Max’s catchphrase, it’s his reason for living. As long as he’s helping others, he’s able to find hope in the most hopeless of places.

Two tweets also promoted the arrival of the series.

Are you missing #NewAmsterdam this Tuesday?

Check out this fun little digital series I co-wrote with @GrahamKNorris and directed by @donscardino — available exclusively on the @NBC App! pic.twitter.com/lAreLCjInk

Check out the first episode of New Amsterdam: Day 1 below.

What do you think? Will you watch the digital series? Are you excited for the return of New Amsterdam?

This is the best tv medical show ever.with zMax being my fav. I cant wzit till jan. For its return,

The prime time broadcast on NBC-TV is one of the best medical series ever made!