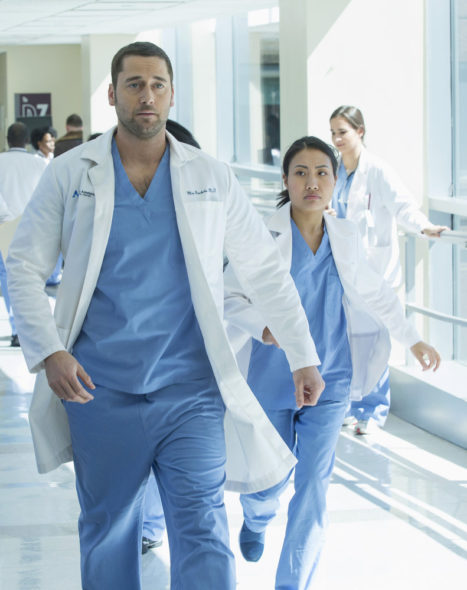 While access to affordable healthcare is still at the forefront of the national conversation, NBC has ordered the New Amsterdam TV show to series. Not to be confused with the quickly cancelled supernatural-themed 2008 FOX TV series of the same name, the new New Amsterdam is a medical drama from writer and EP David Schulner. It is inspired by Bellevue Hospital in New York City — the oldest public hospital in the United States. The new show hails from Universal Television, Pico Creek Productions, and Mount Moriah.

The NBC audience is already well acquainted with Eggold, who co-starred as Tom Keen, on the first five seasons of The Blacklist. He also headlined in that role on the spin-off series, The Blacklist: Redemption, which was cancelled in 2017, after one season of eight episodes.

Inspired by Bellevue, the oldest public hospital in America, this unique medical drama follows the brilliant and charming Dr. Max Goodwin, the institution’s newest medical director who sets out to tear up the bureaucracy and provide exceptional care.

How can he help? Well, the doctors and staff have heard this before. Not taking “no” for an answer, Dr. Goodwin must disrupt the status quo and prove he will stop at nothing to breathe new life into this understaffed, underfunded and under-appreciated hospital — the only one in the world capable of treating Ebola patients, prisoners from Rikers and the President of the United States under one roof — and return it to the glory that put it on the map.

What do you think? Are you a Ryan Eggold fan? Do you plan to check him out in the upcoming New Amsterdam TV show on NBC? Let us know below.

I love New Amsterdam. Been checking to see when it’s coming back.