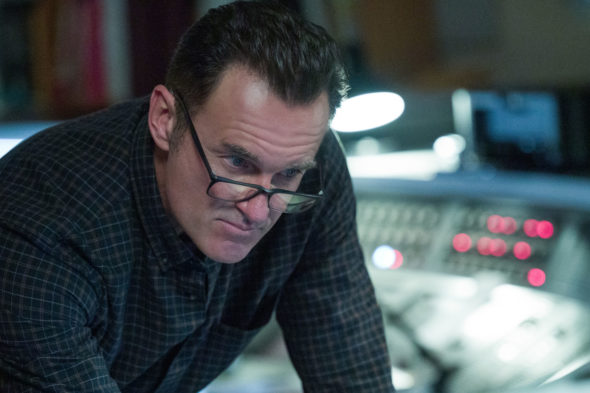 Fugitives beware. Has the FBI: Most Wanted TV show been cancelled or renewed for a fourth season on CBS? The television vulture is watching all the latest cancellation and renewal news, so this page is the place to track the status of FBI: Most Wanted, season four. Bookmark it, or subscribe for the latest updates. Remember, the television vulture is watching your shows. Are you?

Airing on the CBS television network, FBI: Most Wanted is a spin-off of the FBI TV series. The show stars Julian McMahon, Alexa Davalos, Roxy Sternberg, Keisha Castle-Hughes, Miguel Gomez, and Dylan McDermott. The story focuses on the work of the Fugitive Task Force, a team that tracks and captures the notorious criminals on the Federal Bureau of Investigation’s Most Wanted list. The highly skilled agents function as a mobile undercover unit that’s always out in the field, pursuing those who are most desperate to elude justice. Jess LaCroix (McMahon), a seasoned but enigmatic agent, oversees the team which includes forensics expert Sheryll Barnes (Sternberg); computer and hacking whiz Hana Gibson (Castle-Hughes); undercover pro Ivan Ortiz (Gomez); and Navy veteran and cold-case expert Kristin Gaines (Davalos).

The third season of FBI: Most Wanted averages a 0.53 rating in the 18-49 demographic and 5.64 million viewers in the live+same day ratings (includes all DVR playback through 3:00 AM). Compared to season two, that’s down by 9% in the demo and down by 2% in viewership. While these numbers don’t include further delayed or streaming viewing, they are a very good indicator of how a show is performing, especially when compared to others on the same channel. There can be other economic factors involved in a show’s fate, but the higher-rated series are usually renewed and the lower-rated ones are cancelled. Find out how FBI: Most Wanted stacks up against other CBS TV shows.

Will CBS cancel or renew FBI: Most Wanted for season four? The series performed well in its first season and the network has built its Tuesday night schedule around the FBI franchise. I’m confident that Most Wanted will be renewed. I’ll update this page with breaking developments. Subscribe for free alerts on FBI: Most Wanted cancellation or renewal news.

What do you think? Are you glad that the FBI: Most Wanted TV show has been renewed for a fifth season? How would you feel if CBS cancelled this TV series, instead?

PLEASE DO NOT CANCEL FBI MOST WANTED

That’s what CBS is good for always canceling good shows makes me so mad!!!!!

I feel the episode was poorly written and harsh. He died in the parking lot of a hospital, please. It was very low budget. I’m deleting future recordings in case the show is renewed.

Another lead getting killed to weite him off the show. I hate this, all they would have had to do in hurt the daughter in a non life threatening riding accident and he could have left. By killing favorite characters, you are alienating the audience. Both my wife and I are in this category and probably will not watch any more

FBI Most Wanted was my favorite of the series. In spite of the star and leader of the team leaving, I hope it will be renewed

I am saddened by the cancellation of FBI Most Wanted. My husband and I both enjoy watching it.

I would hate to see this series end.

I’ve been a fan of this show since it first aired. I liked all of the original cast and particularly liked the multi-generational family life at home of the main character, Jess. Sorry to see that go away and sorry to see the brother-in-law go, too. I took for granted that after the COVID drought there would be a lot of re-shuffling. We saw it in a number of our favorite shows and many are still reorganizing. It’s unfortunate and this season has suffered for it. But I’m giving them a by on this, hoping that the writing can find… Read more »

Love all the FBI shows. Loved the sideline involving Jess and his family. What happened to them? Too normal? Now we have to spend a good part of the show watching the two females and their relationship. Tired of seeing this in several shows. What ever happened to having a plot in the show. Love to see Tally and her family and the girlfriend again.

After last nights episode 9/28/21, our family decided we are done watching.