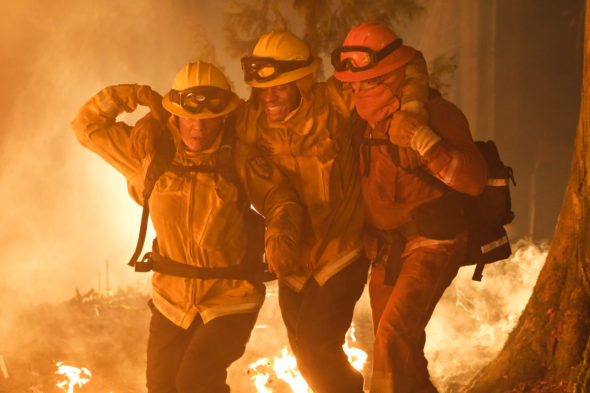 Bode is hoping for a second chance in the first season of CBS’ Fire Country TV show. As we all know, Nielsen ratings typically play a big role in determining whether a TV show like Fire Country is cancelled or renewed for season two. Unfortunately, most of us do not live in Nielsen households. Because many viewers feel frustrated when their viewing habits and opinions aren’t considered, we invite you to rate all of the first season episodes of Fire Country here.

A CBS drama series, the Fire Country TV show stars Max Thieriot, Billy Burke, Kevin Alejandro, Diane Farr, Stephanie Arcila, Jordan Calloway, and Jules Latimer. In the story, Bode Donovan (Thieriot) is a young convict seeking redemption and a shortened prison sentence. He joins a prison release firefighting program in Northern California. It’s a high-risk, high-reward assignment. Bode is unwittingly assigned to Three Rock Con Camp, which is located in his small hometown of Edgewater. That’s where he was once a golden all-American son and also where his troubles began. Five years ago, Bode burned down everything in his life and left town with a big secret. Now he’s back, with the rap sheet of a criminal and hoping for a chance at redemption.

What do you think? Which season one episodes of the Fire Country TV series do you rate as wonderful, terrible, or somewhere between? Do you think that Fire Country should be cancelled or renewed for a second season on CBS?

Another good episode Keeps one interested Good drama and good acting Nice to have something different on tv. Keep it coming

Enjoy the cast and show but need to concentrate a little more on reality of fires, show the destruction and how the town adjusts. As each episode plays getting more into lives of a small town. Hope for season 2 next year.

This show definetly keeps you on your toes with the drama and fires. Very well played and acting!!! I think the music was turned down in last nights show which is good the music was a little loud and hard to hear what was being said. I thing I didn’t want to see in this show was two women kissing and being together if you want that go to a network for that It don’t mean that I have to watch it.Otherwise a very good show.

This is really a good show!!! Lots of drama clean show that keeps one’s interest. looking forward to seeing more of it.

I think this show is interesting and could be a very good one to watch as there isn’t much else to watch except my blue bloods. At least it is starting out to be a decent show and family orientated which we need more of.

Great show. Love the storyline. Wonderful selection of actors. Looking forward to the rest of the season. Only issue is the number of fires in such a small town. Its like the Bermuda Triangle of fires.

I thought it was going to be great. It was just ok.

has potential, but NEED TO TURN DOWN THE BACKGROUND MUSIC TO LOUD AND TO MUCH OF IT!!!!