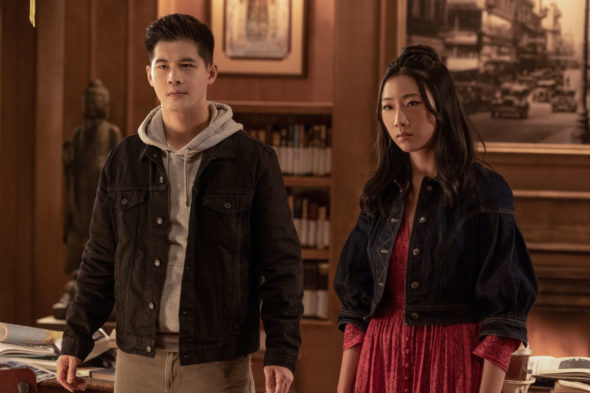 Is Nicky in over her head in the second season of the Kung Fu TV show on The CW? As we all know, the Nielsen ratings typically play a big role in determining whether a TV show like Kung Fu is cancelled or renewed for season three. Unfortunately, most of us do not live in Nielsen households. Because many viewers feel frustrated when their viewing habits and opinions aren’t considered, we invite you to rate all of the second season episodes of Kung Fu here. *Status Update Below.

A CW martial-arts action-adventure TV show, the new version of Kung Fu stars Olivia Liang, Kheng Hua Tan, Shannon Dang, Jon Prasida, Eddie Liu, Gavin Stenhouse, Vanessa Kai, Yvonne Chapman, Tony Chung, and Tzi Ma. Set in the present day, the series revolves around Nicky Shen (Liang), a young Chinese American woman who questions her life’s trajectory and drops out of college to go on a life-changing journey to an isolated monastery in China. When Nicky returns to San Francisco, she finds that her hometown is overrun with crime and corruption. The second season picks up six months later. All is going well for Nicky and her family until the reemergence of sinister billionaire Russell Tan (guest star Kee Chan), and the surprise appearance of Nicky’s long-lost cousin, Mia (guest star Vanessa Yao). With the help of Henry (Liu), Althea (Dang), Ryan (Prasida), Evan (Stenhouse) and Dennis (Chung), Nicky must face off against the Tan family and become a shifu in her own right.

What do you think? Which season two episodes of the Kung Fu TV series do you rate as wonderful, terrible, or somewhere between? Do you think that Kung Fu should be cancelled or renewed for a third season on The CW? Don’t forget to vote, and share your thoughts, below.