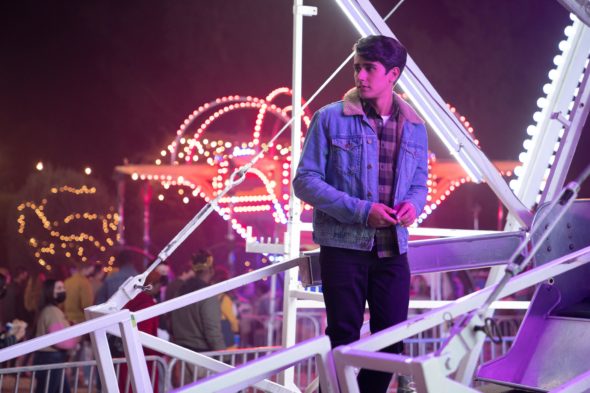 Where will the characters end up by the end of the third season of the Love, Victor TV show on Hulu and Disney+? As we all know, the Nielsen ratings typically play a big role in determining whether a TV show like Love, Victor is cancelled or renewed for season four. (in this case, we know season four is the end). Hulu, Disney+, and other streaming platforms, however, collect their own data. If you’ve been watching this TV series, we’d love to know how you feel about the third season episodes of Love, Victor here.

A Hulu and Disney+ teen-comedy drama series, the Love, Victor TV show takes place in the same world as the Love, Simon feature film and stars Michael Cimino, Rachel Hilson, Anthony Turpel, Bebe Wood, Mason Gooding, George Sear, Isabella Ferreira, Mateo Fernandez, James Martinez, Ana Ortiz, Anthony Keyvan and Ava Capri. As the series begins, the Salazar family — blue-collar father Armando (Martinez), mother Isabel (Ortiz), Victor (Cimino), little brother Adrian (Fernandez), and younger sister Pilar (Ferreira) — has relocated to Atlanta from Texas. Despite feeling out of place at high school, Victor makes friends with classmates like his awkward neighbor, Felix Westen (Turpel), quick-witted Mia Brooks (Hilson), and media-obsessed Lake Meriwether (Wood). On a journey of self-discovery, Victor faces challenges at home, adjusts to a new city, and struggles with his sexual orientation. Season three finds Victor not only deciding who he wants to be with, but more broadly, who he wants to be. With their post-high school plans looming, Victor and his friends are faced with a new set of problems that they must work through to make the best choices for their futures.

What do you think? Which season three episodes of the Love, Victor TV series do you rate as wonderful, terrible, or somewhere between? Do you think that Love, Victor on Hulu and Disney+ should have ended or been renewed for a fourth season? Don’t forget to vote, and share your thoughts, below.