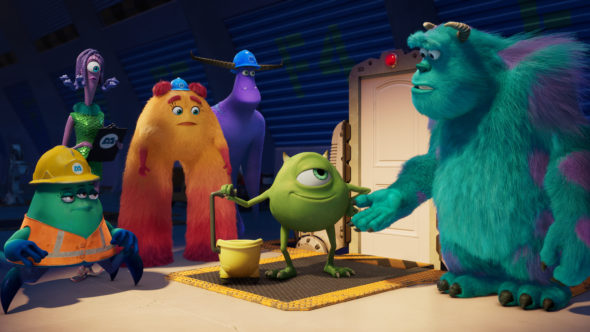 Disney has unveiled a slew of animated series orders and renewals. The shows will be released via the Disney+ streaming service as well as the company’s various cable outlets like Disney Channel, Disney Junior, and Disney XD.

The renewals announced today are for Chip ‘n’ Dale: Park Life (season two), Marvel’s Spidey and his Amazing Friends (season three), Mickey Mouse Funhouse (season three), and Monsters at Work (season two, above). In addition, Disney has ordered 10 additional episodes each for the previously announced series Hailey’s On It, Hansel & Gretel, KIFF, and Primos. This brings each of their respective orders to 30 installments.

Disney announced series orders for The Doomies, Dragon Striker, and ZOMBIES: The Re-Animated Series, which is based on the Disney Channel movie franchise.

Here’s additional information about the new and returning shows:

Today, Disney Television Animation, Disney Junior and Disney Europe, Middle East & Africa (EMEA) took to the stage at the Annecy International Animation Film Festival to announce new productions and show exciting sneak peeks at the upcoming slate of new original animated series to air on Disney+ and other Disney-owned platforms in 2023 and beyond.

“Chip ‘n’ Dale: Park Life,” which features Chip and Dale and their adventures living in the big city, has also been renewed for a second season, which will find the much-loved duo joined by other iconic Disney characters, including Donald and Pluto, in bigger and bolder stories.

Additionally, it was revealed that a new animated series inspired by Disney’s popular music-driven movie franchise “ZOMBIES” is in production at Disney Television Animation and the EMEA Original Productions team announced the greenlight for the epic adventure series “Dragon Striker”and spooky comedy “The Doomies.”

The presentation also included the announcement of season three renewals for Disney Junior megahits “Marvel’s Spidey and his Amazing Friends” and “Mickey Mouse Funhouse” and additional episode orders for some of Disney Television Animation’s upcoming series, including “Hamster & Gretel,” “Kiff,” “Hailey’s On It” and “Primos.”

“The announcements out of Annecy today further cement Disney as THE leader in animation,” said Davis. “These new series represent the very best from our teams at Disney Television Animation and Disney Junior. They build upon Disney Branded Television’s commitment to work with incredible storytellers, whose diverse voices not only allow our young audiences to see themselves reflected on screen but help them better navigate their world.”

When the world’s most popular sport combines with magic, awesomeness escalates quicker than a dragon-powered strike! In this action-packed adventure full of comedy and high-stakes sports drama, elite players have a magical signature move they can use on the pitch. Twelve-year-old Key is a farm boy fanboy who can only dream of entering the famous school where the greatest players train before joining the big leagues – until he discovers he has his own ultra-powerful spell and may even be the legendary “Dragon Striker.” Key joins a team of hapless underdogs who band together to take on the school champions, all the while fighting to prevent an ancient evil from resurfacing.

When best friends Bobby and Romy mistakenly open up a gateway to another world, they turn their sleepy coastal town into a hotspot for terrifying creatures of doom. Roped into an epic supernatural mystery, they will cross paths with the so-called “Chosen One” and do battle with both literal and inner monsters. “The Doomies” is a spooky comedy that combines thrills, chills and surprises with character-driven comedy from an odd couple of ordinary teens engulfed by extraordinary circumstances. Its fast-paced humor and high-stakes action take place in a quirky French town in the heart of Brittany, imagined with moody flair and graphic style.

Orion Ross, vice president of Animation, Disney EMEA, commented: “‘The Doomies’ and ‘Dragon Striker’ are the first part of a new slate of animated originals we’re developing in EMEA for global family audiences on Disney Channel and Disney+. These ambitious, premium series will introduce the work of leading creators from our region to the world, and we are both honored and inspired to be working with this new generation of storytellers.”

Every day is a surprise at Seabrook High – whether you’re a cheerleader, a zombie, a werewolf or even a vampire! “ZOMBIES: The Re-Animated Series” invites us into the daily lives of Zed, Addison, Eliza, Willa and the entire Seabrook crew. This gang may have figured out each other, but they haven’t quite figured out how to survive high school. Get ready for more musical fun and new friends as Seabrook becomes the #1 destination for all kinds of mythical monsters looking for a fresh start. And this means some pretty wild adventures – from the cafeteria to the football field – because sometimes the scariest thing you have to face is high school.

Produced by Disney Television Animation, “Monsters at Work” is inspired by the world of Pixar’s Academy Award(R)-winning “Monsters, Inc.” and introduces new monster characters alongside returning favorites. In season two, Tylor’s journey as a Jokester and his friendship with Val face the ultimate test. When new doors of opportunity unexpectedly open at rival energy company FearCo, Tylor’s co-workers at Monsters Inc. begin to question where his loyalties truly lie. As his Laugh Floor partnership with Val is pushed to the brink, Tylor must discover where he really belongs. The series’ star-studded cast – including Billy Crystal (Mike Wazowski), John Goodman (James P. “Sulley” Sullivan), Ben Feldman (Tylor Tuskmon), Mindy Kaling (Val Little), Henry Winkler (Fritz), Lucas Neff (Duncan) and Alanna Ubach (Cutter) – will all be returning for the second season.

The first full-length Marvel series for preschoolers, “Marvel’s Spidey and his Amazing Friends” follows the adventures of Peter Parker, Gwen Stacy and Miles Morales as they team up with Hulk, Ms. Marvel and Black Panther to defeat foes like Rhino, Doc Ock and Green Goblin and learn that teamwork is the best way to save the day.

The whimsical animated series “Mickey Mouse Funhouse” introduces preschoolers’ first pal, Mickey Mouse, and his friends – Minnie, Goofy, Donald, Daisy and Pluto – to Funny, an enchanted talking playhouse who takes the Sensational Six on adventures of all types to unique worlds that inspire the imagination. Designed to inspire kids to expand their creative play, encourage wish fulfillment and impart lessons of friendship and ingenuity, each episode features two 11-minute stories separated by a midway stretch break.

A 22-minute special, “Mickey Mouse Funhouse: Pirate Adventure,” is set to premiere this August and features legendary pirate Captain Salty Bones (voiced by John Stamos) as he invites Mickey, Minnie and friends to join the biggest treasure hunt ever and see if they can become true pirates.

From Emmy Award-winning Dan Povenmire (of the beloved global hit series “Phineas and Ferb”), “Hamster & Gretel” introduces Kevin and younger sister Gretel, who are about to be bestowed superpowers by space aliens. But something goes awry, and it’s Gretel and her pet hamster (named Hamster) who suddenly have new abilities. Now, protective older brother Kevin must figure out how to work with both Gretel and her pet Hamster to protect their city from mysterious dangers.

From South African creators Lucy Heavens and Nic Smal, “Kiff” is set in the bustling mountains where you’ll find animals and magical creatures living happily together, and at the center of it all is Kiff, an optimistic squirrel whose best intentions often lead to complete chaos. Along with her best friend, Barry, a sweet and mellow bunny, this duo takes their town by storm with their endless adventures and zest for life.

Starring Auli’i Cravalho (Walt Disney Animation Studios’ “Moana”) as the voice of title character Hailey and Manny Jacinto (Hulu’s “Nine Perfect Strangers,” “The Good Place”) as her best friend, Scott, “Hailey’s On It,” follows Hailey Banks, a risk-averse but resourceful teenager on a mission to complete every item on her long list of challenging (and sometimes impractical) tasks in order to save the world. Hailey will be pushed outside her comfort zone to discover the greatness within as she systematically conquers her fears, whether she is winning a sand-building competition, wrestling a honey badger, eating a raw onion, or facing her ever-growing and complicated feelings toward her best friend, Scott.

Inspired by creator/executive producer Natasha Kline’s childhood experiences with her extended multicultural Mexican American family, the series introduces Tater, an eccentric 10-year-old girl with big dreams and, unbeknownst to her, a certain “it factor” that makes her exceptional. When her 12 cousins (“primos” in Spanish) move in for the summer, they help her discover just what it is.

During the presentation, Ayo Davis gave Annecy attendees sneak peeks at the recently announced “Star Wars: Young Jedi Adventures,” the first full-length Star Wars series for preschoolers premiering on Disney Junior and Disney+ in spring 2023, as well as “Marvel’s Moon Girl and Devil Dinosaur,” which follows the adventures of 13-year-old super-genius Lunella Lafayette and her 10-ton T-Rex, Devil Dinosaur. She also showed a clip from the upcoming Disney Original Documentary “Mickey: The Story of a Mouse.”

Alyssa Sapire gave an update on the upcoming Disney Junior slate, which includes “Eureka!,” “Firebuds,” “SuperKitties,” “Kindergarten: The Musical,” “Hey A.J.” and “RoboGobo”; and Meredith Roberts spoke about some of the current hits for Disney Television Animation including “Big City Greens,” “The Owl House,” “The Wonderful World of Mickey Mouse” and “The Proud Family: Louder and Prouder.”

Orion Ross spoke about the ongoing importance of co-productions and creative partnerships with leading independent studios across the EMEA region on current and upcoming series, including “Miraculous: Tales of Ladybug and Cat Noir,” “Ghost Force,” “The Unstoppable Yellow Yeti” and “Viking Skool.”

What do you think? Do you or someone else in your home watch any of these returning Disney shows? Do any of the new series sound particularly appealing?